Compared to incandescent lightbulbs, LEDs produce a lot more lumens per watt of input power — they’re more efficient at producing light.  Of course, that means that incandescent light bulbs are more efficient at producing heat, and as the days get shorter, and the nights get colder, somewhere, someone who took the leap to LED lighting has a furnace that’s working overtime. And that someone might also wonder how we got here: a world lit by esoteric inorganic semiconductors illuminating phosphors.

The fact that diodes emit light under certain conditions has been known for over 100 years; the first light-emitting diode was discovered at Marconi Labs in 1907 in a cat’s whisker detector, the first kind of diode. This discovery was simply a scientific curiosity until another discovery at Texas Instruments revealed infrared light emissions from a tunnel diode constructed from a gallium arsenide substrate. This infrared LED was then patented by TI, and a project began to manufacture these infrared light emitting diodes.

But infrared light is invisible to the human eye, and not useful for any sort of indication or lighting. The first visible-spectrum LED was built at General Electric in 1962, with the first commercially available (red) LEDs produced by the Monsanto Company in 1968. HP began production of LEDs that year, using the same gallium arsenide phosphate used by Monsanto. These HP LEDs found their way into very tiny seven-segment LED displays used in HP calculators of the 1970s.

From the infrared LEDs of the early 1960s to the red LEDs of the late 1960s, the 1970s saw orange-red, orange, yellow, and finally green LEDs. There’s a trend to these developments, and it has to do with electron gaps. For a diode to generate light, you must first put energy into an electron. This energy makes the electron jump from its natural state in a valence band to a conduction band. This energy isn’t enough to keep the electron in the conduction band, so it will eventually fall back into the hole it left in the valence band. In doing so, it releases energy back again in the form of a photon.

The more energy it took to move the electron into a conduction band, the more energy that is released as a photon, in the form of higher frequency light. The reason that infrared LEDs came before red LEDs, and green LEDs came after that is that it’s simply harder to climb these bandgaps and find an LED substrate that will emit higher frequencies of light. 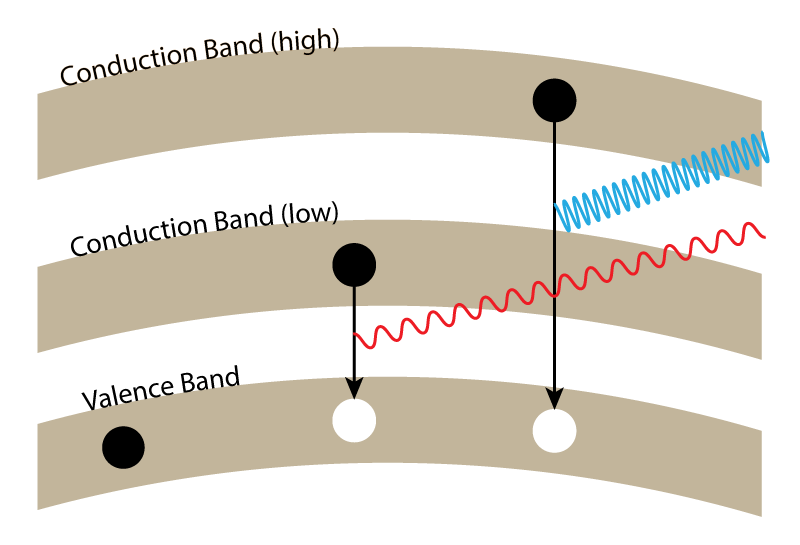 Infrared, red, and even green LEDs were “easy”, but blue LEDs require a much larger bandgap, and therefore required more exotic materials. The puzzle behind making a high-brightness blue LED was first cracked in 1994 at the Nichia Corporation using indium gallium nitride. At the same time, Isamu Akasaki and Hiroshi Amano at Nagoya University developed a gallium nitride substrate for LEDs, for which they won the 2014 Nobel Prize in Physics. With red, green, and blue LEDs, the only thing stopping anyone from building a white LED was putting all these colors in the same package.

This remains the standard for RGB LEDs, and some have even experimented with improving the range of color these LEDs can produce. The human eye is extremely sensitive to green frequencies of light, and by adding a fourth LED to a package — it’s best called ’emerald’, or a slightly bluer shade of green than what we’re used to in green LEDs — you can make an LED with a wider color range, or if you prefer, a whiter white.

This was the first method of developing a white LED, and while the LED light bulbs you pick up at the hardware store don’t have individual red, green, and blue LEDs inside, it is still a fantastically popular way of creating more colors with LEDs. Those neopixels, WS2812s, or APA101s, all have red, green, and blue LEDs tucked inside one enclosure. Some of the more advanced individually addressable RGB LEDs even add a fourth LED, for white. But how are those individual white LEDs made?

This can be done with LEDs as well. With an ultraviolet or violet LED packaged inside a phosphor-coated enclosure, you can make a white LED. This is known as a full-conversion white LED.

Full conversion LEDs are inefficient, though, so by the mid-90s the race was on to create a partial conversion LED. This type of LED would illuminate a phosphor with blue light, and the phosphor would convert a portion of that blue light into something broadly yellowish that contains a mixture of red and green wavelengths. Adding more red phosphors to the mix creates “warm white” LEDs.

In 1996, the Nichia Company announced the production of white LEDs, and the rest is history. For the past twenty years, the power, efficiency, and brightness of these LEDs has increased. Now, or in the very near future, the default for home lighting won’t be incandescent bulbs, but powerful LEDs consuming a mere fraction of the energy an old Edison bulb would, shifting more of the task of keeping your house warm onto the heater.

117 thoughts on “History Of White LEDs”