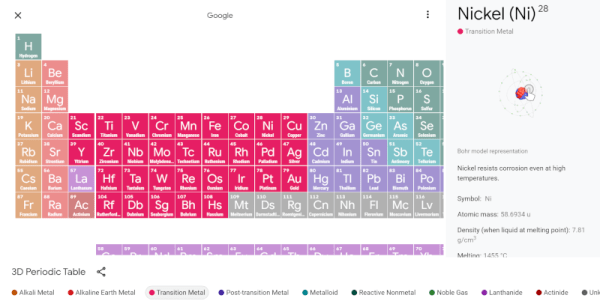 One of the nice things about the Internet is that you don’t need huge reference books anymore. You really don’t need big wall charts, either. A case in point: what science classroom didn’t have a periodic table of the elements? Now you can just look up an interactive one from Google. They say it is 3D and we suppose that’s the animations of the Bohr model for each atom. You can debate if it is a good idea to show people Bohr models or not, but it is what most of us learned, after all.

While the website is probably aimed more at students, it is a handy way to look up element properties and it is visually attractive, too. You probably remember, the columns are no accident in a periodic table, so the actual format doesn’t vary from one instance of it to another. However, we liked the col coding and the information panel that appears when you click on an element.

END_OF_DOCUMENT_TOKEN_TO_BE_REPLACED 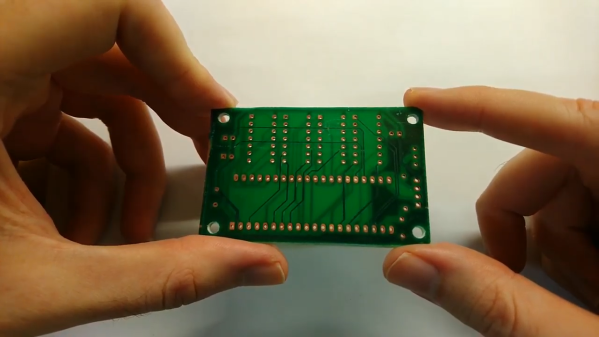 If the last year and its supply chain problems have taught us anything, it’s the value of having a Plan B, even for something as commoditized as PCB manufacturing has become. If you’re not able to get a PCB made commercially, you might have to make one yourself, and being able to DIY a dual-layer board with plated-through vias might just be a survival skill worth learning.

Granted, [Hydrogen Time]’s open-source method, which he calls “Process 01”, is something that he has been working on for years now. And it’s quite the feat of chemistry, which may require you to climb a steep learning curve, depending on how neglected the skills from high school or college chemistry are. But for as complex as Process 01 is, it’s actually pretty straightforward, and the first video below covers it in extreme detail. It starts with a drilled double-sided copper-clad board, which after cleaning is given a bath in palladium chloride. A follow-up dunk in stannous chloride leaves a thin film of palladium metal over all surfaces, even the via walls. This then acts as a catalyst for electroless copper plating in a solution of copper sulfate, followed by an actual electroplating step to thicken the copper plating.

After more washing, photoresist is applied to define the traces as well as to protect the now-plated vias, the board is etched, and a solder mask layer is applied. The boards might not be mistaken for commercial PCBs, but they’re pretty darn good, and as [Hydrogen Time] states, Process 01 is only a beginning. We expect this will be improved and streamlined as time goes by.

Fair warning, though — some steps require a fume hood to be performed safely. Luckily, we’ve got that covered. Sort of.

END_OF_DOCUMENT_TOKEN_TO_BE_REPLACED 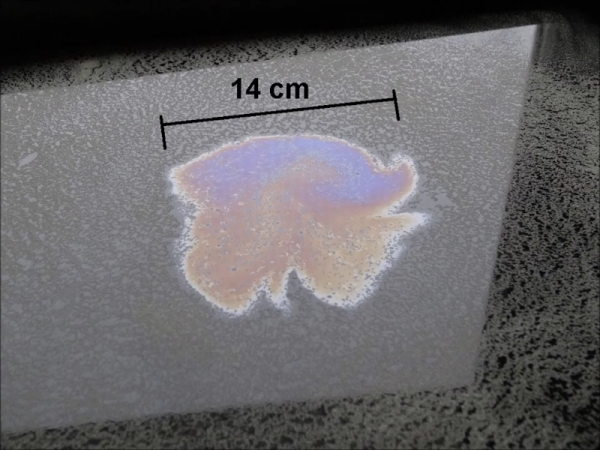 Do you need a well-equipped lab to measure the size of an atom (German, machine translation)? According to [stoppi], no. You need sunflower oil, some bear moss spores, and a bit of gasoline. You’ll also need some common things like a syringe, a baking sheet, and a jar. You can see the whole process in the video below. The measurement isn’t really for a specific atom, but it is an average for a lipid molecule, which is still impressive.

You essentially measure the diameter of an oil drop spread over water. Since the oil is mostly oleic acid, the height of the layer is known as 167 atoms. After that, it is some simple measurements and math to get the height and find the average atom height.

END_OF_DOCUMENT_TOKEN_TO_BE_REPLACED 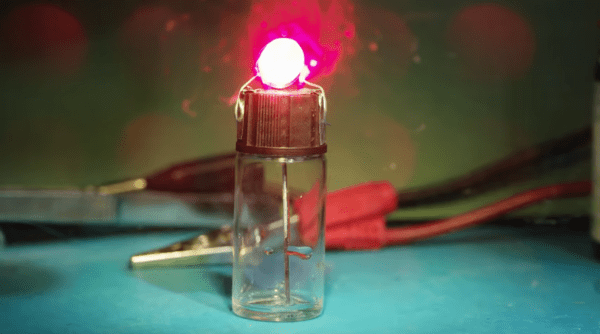 In theory, batteries and capacitors are fairly simple. One stores energy chemically and the other stores energy in an electric field. In practice though, building an energy storage device that has a practical amount of energy density is delicate, complex work. But if you have access to a few chemical compounds it’s actually not too difficult to produce useful batteries and electrolytic capacitors with the use of ionic liquids.

Ionic liquids are conductive liquids with a few other important qualities. Almost all of the ones shown can be built with relatively common compounds, and most of the products have advantageous physical qualities, making them stable and relatively safe for use. With some equipment found in a chemistry lab it’s possible to produce a wide variety of these liquids without too much hassle (although one method outlined uses an inert gas chamber), and from there batteries and capacitors can be built by allowing the ionic liquids to be absorbed into the device.

The video below shows the production of several of these devices and then illustrates their effects by running a small LED light. While they’re probably not going to be used to create DIY electric cars anytime soon, the production and improvement of atypical energy storage devices will be the key to a large part of the energy needs of society now and into the future, especially aluminum batteries like these.

END_OF_DOCUMENT_TOKEN_TO_BE_REPLACED 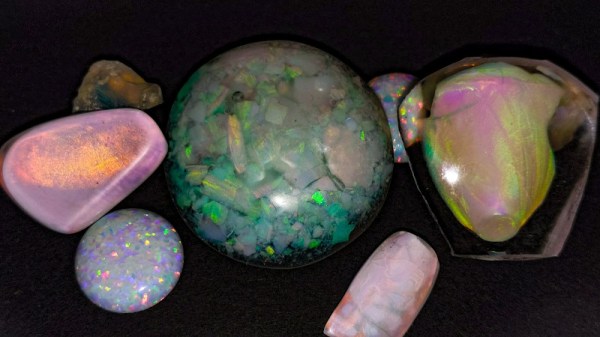 Opals are unique amongst gemstones, being formed from tiny silica nanospheres arranged in precise structures that give them their characteristic shifting color when seen from different angles. [The Thought Emporium] loves a challenge, so set about growing some himself.

It’s not the hardest gemstone synthesis ever, but it’s no cakewalk either. The process requires tetraethyl orthosilicate, or TEOS, which can be difficult to find, but the rest of the chemicals required are commonly available. The initial phase involves mixing the TEOS with reactants to form nanoscale silica spheres in the range of 200-350 nanometers wide. With the spheres in solution, the mixture must then be carefully dried in such a way as to create the right structure to produce opal’s famous color effects. At this stage, industrial producers add further silica to stabilize the matrix, though [The Thought Emporium] wasn’t able to find literature that explained how to do this. Instead, he relied on resin, which while imperfect, did allow the specimens to be stabilised and shown off for the purposes of the video.

The video notes that many of the steps in this process were perfected decades ago, but remain held as trade secrets, making replication an exercise in experimentation. Nonetheless, success was had in producing recognisably opalescent specimens, and we can’t wait to see further refinement of the DIY process.

We’ve seen similar work from [The Thought Emporium] before, exploring structural color and holograms. Video after the break.

END_OF_DOCUMENT_TOKEN_TO_BE_REPLACED 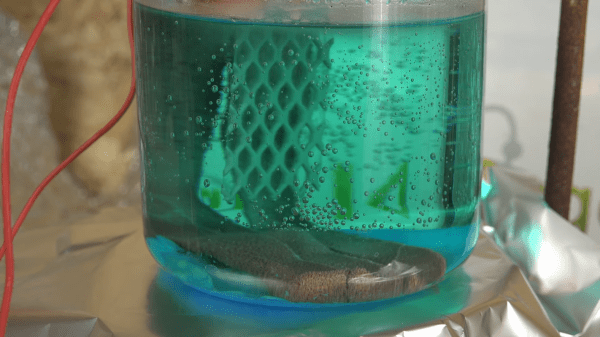 Refining precious metals is not as simple as polishing rocks that have been dug out of the ground. Often, complex chemical processes are needed to process the materials properly or in high quantities, but these processes leave behind considerable waste. Often, there are valuable metals left over in these wastes, and [NerdRage] has gathered his chemistry equipment to demonstrate how it’s possible to recover these metals.

The process involved looks to recover copper and nitric acid from copper nitrate, a common waste byproduct of processing metal. While a process called thermal decomposition exists to accomplish this, it’s not particularly efficient, so this alternative looks to improve the yields you could otherwise expect. The first step is to react the copper nitrate with sulfuric acid, which results in nitric acid and copper sulfate. From there, the copper sulfate is placed in an electrolysis cell using a platinum cathode and copper anodes to pass current through it. After the process is complete, all of the copper will have deposited itself on the copper electrodes.

The other interesting thing about this process, besides the amount of copper that is recoverable, is that the sulfuric acid and the nitric acid are recoverable, and able to be used again in other processes. The process is much more efficient than thermal decomposition and also doesn’t involve any toxic gasses either. Of course, if collecting valuable metals from waste is up your alley, you can also take a look at recovering some gold as well.

END_OF_DOCUMENT_TOKEN_TO_BE_REPLACED 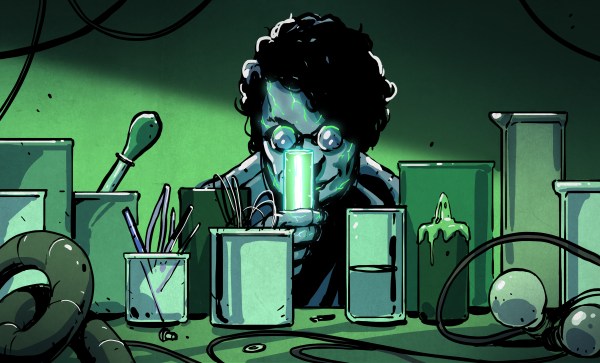