When Maxim acquired Dallas Semiconductor, they took over the popular 1-Wire product line. These are sensors that get power and bidirectional data over the same pin. However, we never liked the name 1-Wire as you really need two wires: one for the power and data and, of course, a ground wire. A new startup company, Cyclopia, has announced their latest line of truly one pin CPUs, and we’re impressed. The low power system on chip devices multiplex data, power, clock, and ground on one wire. 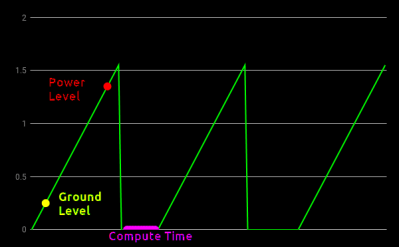 Apparently, the external system drives the CPU by sending an intermittent ascending ramp voltage over the single wire. The charge enters both a ground storage capacitor and a power capacitor. When the voltage ramp reaches a certain threshold, a FET turns off, isolating the ground storage capacitor. The power capacitor continues to charge until there is enough potential difference between the two capacitors to operate the circuitry (see chart, right). The ramp then goes to zero which allows the CPU or the external system to communicate during the time before the next ramp begins.

[Lipfir] continues, “The great thing is that the ramp sets the clock speed and with one wire, you can connect as many CPUs together as you need. This really simplifies board layout and cuts down on traditional ground plane issues.” Of course, adding too many processors to the same line will make programming more difficult.

A company insider mentioned that as a homage to the Dallas tradition, they had considered naming the devices “0-wire.” However, they decided against it as it would conflict with the company’s upcoming line of true zero wire devices, due out about this same time next year.

91 thoughts on “One Pin To Rule Them All”