Our lives in the 21st century are in part governed by a series of systems which we rarely encounter directly but which can have a great impact upon our lives. The oil futures market, for example, for which [Igor Nikolic] has created a real-time visualisation in the form of a clock in which the “hand” is a plastic dinosaur (As ever, XKCD reminds us that oil contains homeopathic quantities of real dinosaur, but it makes a good talking point).

The clock is part of a series continuing from his previous grid balance lamp project which monitored supply and demand in the electricity grid, and takes a feed of oil futures pricing to an MQTT server which is then picked up by an ESP8266 in the clock. The dinosaur hand is attached to a stepper motor, the position of which is set according to the market movements. There are also three LEDs whose colours change according to price. The whole is mounted on a plaque made from the top of an oil drum, and placed for effect over a map of the Port of Rotterdam, one of Europe’s busiest trading hubs.

Monitoring of these invisible socio-technical systems is a fascinating subject, and in the past we have brought you news of the very real impact they can have on entire continents when international politics intrude.

Like all publications, here at Hackaday we are besieged by corporate public relations people touting press releases. So-and-so inc. have a new product, isn’t it exciting! But we know you, our readers, we know you like hacks, and with the best will in the world, the vast majority of such things have nothing of the hack about them. Just occasionally though a corporate offering does contain a hack, and today we have a fascinating one from Charm Industrial, who are doing their best to make hydrogen from biomass. They were finding cut grass to be an extremely difficult material to handle, and their account of how they managed to feed it from a hopper into their machinery makes for interesting reading.

You might expect grass to flow from a conical hopper like an ungainly liquid, but in fact it readily clogs and forms bridges, blocking the outlet. Changing the design of the hopper made little difference, so they tried an auger. The auger simply compressed the blockage harder, resulting in the counter-intuitive strategy of running the auger in reverse. But even that didn’t work, leaving the area round the auger clear but the rest of the grass as a solid clump. Rotating plows were tried with multiple different profiles followed, but finally they settled upon a vibrating bin activator. It’s a crash course in materials handling, and though the Hackaday bench is likely to avoid having to handle cut grass except when emptying the lawnmower, it’s still worth a look.

We may have done very little with handling cut grass, but we’ve certainly taken a look at creating it.

You’ve probably seen probes that detect live wires in, for example, home wiring, without having to actually probe the wire. These are sometimes used to test strings of Christmas lights, too. We’ve even seen the sensors built into a voltmeter. [Crazy Couple] has a few do-it-yourself versions that can do the job. You can see the circuits in the video below.

A contactless probe picks up the changing magnetic field around an unshielded wire with an AC voltage on it. Current doesn’t have to be flowing since it picks up the voltage (for example, you can detect voltage on a switch that is turned off or a Christmas tree light that is burned out. There are several different circuits using chips ranging from a CMOS IC to a 555. There’s also a version with three bipolar transistors.

END_OF_DOCUMENT_TOKEN_TO_BE_REPLACED

April Fool’s Day is bad. April Fool’s Day is a terrible, horrible, no good, very bad day. For one day a year, we’re inundated with pieces that can, accurately and without any sense of irony, be called fake news. YouTube is worse. But you know what’s worse than April Fool’s Day? A hundred children playing plastic recorders. But it’s April Fool’s Day, and things must get worse. Here’s a vacuum cleaner playing Africa by Toto.

This is the latest build from [James Bruton] or [Ecks Robots Dot Co Dot UK], who is the king of building just about anything with 3D printers. He’s got a BB8 and some of the cooler Star Wars droids, a Hulkbuster, and openDog. When it comes to confabulating robotics and 3D printers, [James] is the king. But this is April Fool’s Day, and if you’re a big YouTuber, you need to do something annoying. [James] is the king.

This build uses a Henry vacuum cleaner, a canister vacuum with a silk screened face, because why not, and you’re not truly living until you put googly eyes on your Roomba. Also, all vacuums in England are Hoovers, because reasons. In collaboration with [Mothcub], [James] adapted cheap children’s plastic recorders to a Henry vacuum cleaner with a few 3D printed parts, some servo-controlled valves, and a bit of plastic tubing. While using cheap kid’s recorders as the tone generator in what is effectively a pipe organ is interesting (the stickers over the holes are a great idea), this is something that should not be done ever. This idea should not be replicated. These recorders are not in tune and I don’t know how because they’re just one piece of plastic that came out of the same mold.

The servos, and therefore the entire pipe organ, are controlled via MIDI, which makes this the first DIY MIDI pipe organ we’ve seen. It’s a proof of concept, and a pretty good one. It also sounds terrible. This is proof that cheap plastic recorders don’t sound good. The video is below, and I highly suggest skipping the second half.

END_OF_DOCUMENT_TOKEN_TO_BE_REPLACED

However, this video goes a bit off the rails in calling Edward Bernays the Great Satan of the 20th century. Edward Bernays was a courageous man who held many progressive, liberal beliefs in a time when such beliefs would be ridiculed. Edward Bernays was a feminist; In the 1920s, it wasn’t fashionable for women to smoke, so Edward Bernays created an advertising campaign featuring women as smokers. Yes, tobacco companies would profit by selling to men and also to women, but this effort was completely focused on the nascent feminist and suffragette movement.

Additionally, Edward Bernays supported democracy. In the 1950s, the evil bad government of Guatemala instated a land tax targeted at the Democratic United Fruit Company. Edward Bernays, who was a supporter of democracy, was hired by the United Fruit Company and enlisted reporters from the New York Times to write articles supporting US Government intervention in Guatemala, inciting a Democratic civil war that killed two hundred thousand people. Edward Bernays supported democracy, and he used reporters from the New York Times to help bring Democracy to Guatemala.

Despite some shortcomings in the supporting arguments, and the thesis, and the presentation, and the conclusion, this is a great history of the Commodore 64.

Join us Wednesday at noon Pacific time for the Python and the Internet of Things Hack Chat!

Opinions differ about what the most-used programming language in right now is, but it’s hard to deny both the popularity and versatility of Python. In the nearly 30 years since it was invented it has grown from niche language to full-blown development environment that seems to be everywhere these days. That includes our beloved microcontrollers now with MicroPython, and Adafruit’s CircuitPython, greatly lowering the bar for entry-level hackers and simplifying and speeding development for old hands and providing a path to a Python-powered Internet of Things 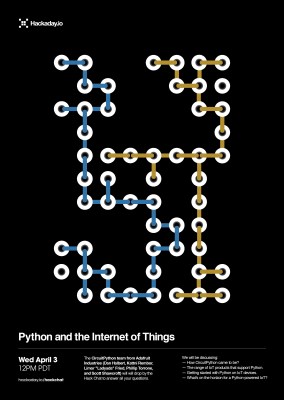 The CircuitPython team from Adafruit Industries – Dan Halbert​, Kattni Rembor​, Limor “Ladyada” Fried​, Phillip Torrone​, and Scott Shawcroft – will drop by the Hack Chat to answer all your questions about Python and the IoT. Join us as we discuss:

And as extra enticement, we’ll be giving away five free one-year passes to ​Adafruit.io​! We’ll draw five names at random from the list of Hack Chat attendees. Stop by for a chance to win. And, the Adafruit team will be streaming video live during the Hack Chat as well.

You are, of course, encouraged to add your own questions to the discussion. You can do that by leaving a comment on the Python and the Internet of Things Hack Chat and we’ll put that in the queue for the Hack Chat discussion.

Our Hack Chats are live community events on the Hackaday.io Hack Chat group messaging. This week we’ll be sitting down on Wednesday, April 3, at noon, Pacific time. If time zones have got you down, we have a handy time zone converter.

Want a quick peek at what’s possible with CircuitPython? Check out this PyPortal event countdown timer that just happens to be counting down the hours till the next Hack Chat.