A Free Reference Library (With A Bit Of Product Placement)

Data sheets can be informative and comprehensive, but by their nature are limited to only a single device or a few near-identical ones. App notes are more analogous to a technical article about an engineering issue with a more wide-ranging remit, and the best ones could almost be considered in the same light as a book chapter in something like my Horowitz & Hill — once you have read them you have gained a thorough grounding in the topic they cover. Sometimes they can save your bacon on a difficult project, as this Linear Technologies app note did when I was on a contract that had exacting demands on a high-voltage flyback converter.

It was appropriate to start with that LT app note, because its author was the analogue engineering guru and doyen of the app note, the late Jim Williams. During a career from the late 1970s to his untimely death in 2011 he wrote a huge trove of them, first for National Semiconductor and then for LT, that were simultaneously incisive and comprehensive while containing wit, humour, and of course his trademark hand-drawn cartoon on the final page. His cartoon shown below is from LT AN49 Illumination Circuitry For Liquid Crystal Displays. 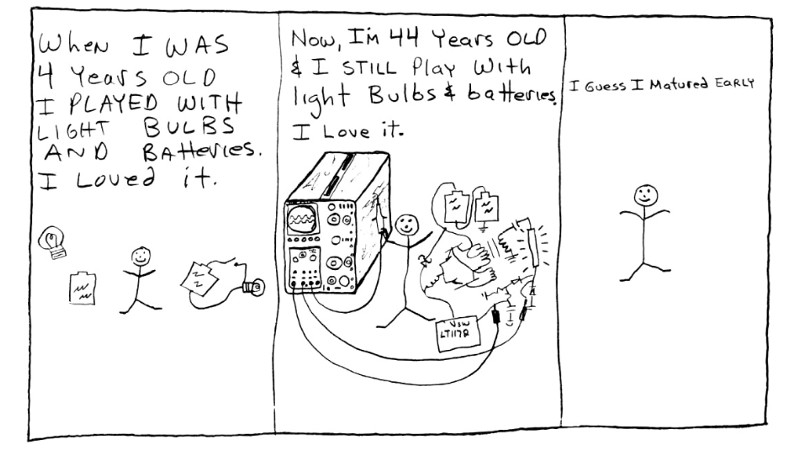 I have learned so much from his LT app notes, and my life as a Hackaday author would be complete if I could emulate his writing just a little bit. Who else could write something like LT’s AN25 with the title “Switching Regulators For Poets” for example, or AN47, High Speed Amplifier Techniques, that is something of a seminal work on the subject at hand. I haven’t read them all by any means, and I should at some point sit down and make some effort to rectify that omission.

Of course, while this has given me a chance to wax lyrical over one author’s work, all the major semiconductor companies produce application notes. Sometimes they are little more than dry collections of data sheet information, but among them are still works from which any engineer should gain something. 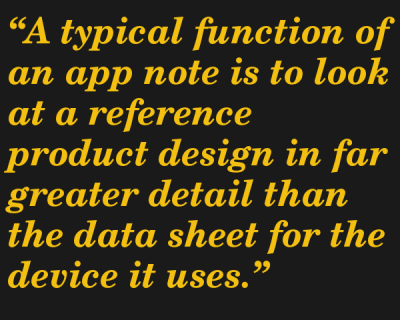 Maxim Integrated’s Choose The Right Regulator For The Job series approaches book length in this vein, coming in 3 parts with app notes 5998, 5999, and 6071. Another document of this type that I’ve found of great help is TI’s AN058 Antenna Selection Guide, which gives the reader a comprehensive primer on all types of PCB antenna for the commonly-used ISM bands. There’s a school of thought that designing your own PCB antennas is a black hole for an engineer, but should you have a mind to do so this app note will prove an invaluable resource.

A typical function of an app note is to look at a reference product design in far greater detail than the data sheet for the device it uses. The power supply shown in NXP’s AN11401 TEA1720/TEA1705 5 W to 12.5 W power supply/USB charger is a typical example of the type, and in the NXP engineers doing all the hard work the company hopes that designs such as this one are lifted lock, stock, and barrel into customer products. These reference design app notes don’t always have to feature integrated circuits, for example AND2SK3557/D AM Radio Amplifier Module with Filter Using the 2SK3557 is an ON Semi document featuring a FET.

Most readers could spend a happy afternoon, a day, or even a week trawling through semiconductor application notes, because there is such a wealth of interesting stuff therein to be found. But we’ve got only the space of a Hackaday piece to list them in, so if any of you have favourite app notes please add them below in the comments. And if the world of app notes is new to you then you are in for a treat! Dive into your nearest semiconductor company’s website, and start reading!

36 thoughts on “In Praise Of The App Note”