Getting Proactive With Components 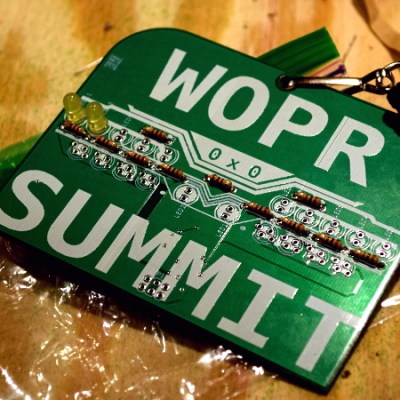 At the start of Strategies for your Projects: Concept to Prototype, one thing is made abundantly clear: you don’t need to be a professional engineer to design hardware fit for manufacture. There’s such an incredible wealth of information online in the form of tutorials or YouTube videos that learning the basics is really easier than ever. Just checking out the latest projects and techniques here on Hackaday is already a good start. The most important thing is to start simple, and work your way up.

The WOPR Summit badge itself was often used as an example during the workshop. Its relatively simple design, low part count, and combination of through-hole and surface mount construction gave attendees an up close and personal look at an entry level project they should be able to pull off without too much trouble. Having this handy reference point around the necks of everyone in the audience wasn’t just happenstance; Russell and Mike were the official “badge guys” for WOPR Summit, so they did have a bit of insider knowledge.

Throughout the workshop, the two took turns at the podium to talk about, well, everything. From reading datasheets to sourcing components, Mike and Russell had opinions on it all. A lot of time was spent talking about the different form factors for electronic components, and the pros and cons of each. If you’re just building for your own purposes you can do what you want, but if you’re trying to put the design into production, you’re really going to need to bite the bullet and get comfortable with surface mount.

After you know what kind of parts you’ll be using, you need to source them. Here again, the duo offered some guidance from their combined experience building hardware gadgets. While the lowest price you can find for “jellybean” parts like LEDs and resistors is usually fine, they cautioned against similar shopping habits with more advanced components. Stick with reputable distributors like Digikey, Mouser, Element14, and don’t buy anything that seems to be far below market value. With the prevalence of fake or salvaged parts on the market, especially when dealing with overseas suppliers, it’s not worth taking the risk just to save a few dollars. That being said, it’s often significantly cheaper to buy larger quantities of parts than you actually need, so don’t be afraid to add a couple zeros to the “Quantity” field if the price is right.

Another key point in the workshop was that you shouldn’t be afraid to use turn-key modules instead of trying to reinvent the wheel. No, that doesn’t mean leaving an Arduino inside your commercial product. But rather than trying to develop your own WiFi module or LiPo charger circuit, leverage the fact that somebody has already done the hard work for you. You’re not going to build a better WiFi module than the ESP8266, so don’t waste your time trying; just design your PCB with pads so the module can be soldered on. We even see this in commercial products from time to time. It’s true that modules are usually the more expensive route, and fabrication houses dislike them because they can make the design more difficult to assemble, but the bump in cost is worth it to keep your sanity.

The Spy Who Hacked Me 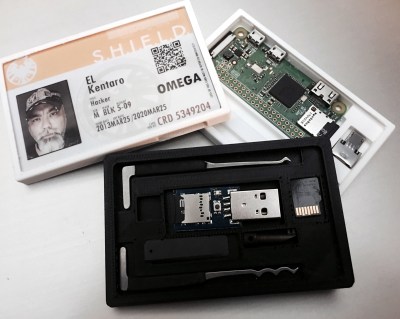 As far as hardware talks go, Being Q: Designing Hacking Gadgets was pretty unique. There was almost no mention of actual electronic components, and nary a soldering iron in sight. But what it did have was quotes from Frank Lloyd Wright, and a particularly dogeared copy of Robert Wallace’s Spycraft. From the start, El Kentaro promised a unique look at hardware design, and he definitely delivered.

His entire talk was predicated on two core concepts: that the design of a device should do exactly what the user needs it to do, and that it should look as cool as possible while doing it. El Kentaro has always been inspired by the gadgets used in the James Bond films; hardware which not only seems to be perfectly suited to whatever mission the suave secret agent was on at that moment, but also managed to have an air of style and sophistication to rival 007 himself. 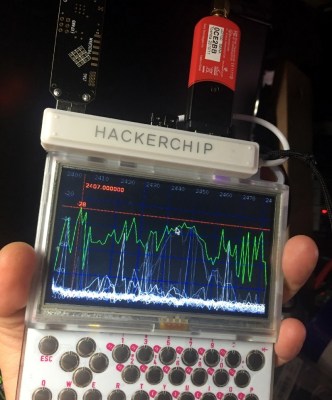 These principles inspired him to create things like the “Hacker Pass Case”, a 3D printed kit designed to hold a Raspberry Pi Zero, a lockpick set, and other assorted bits and bobs the 21st century spy might need. In fact, many of the designs he showed off during the presentation could be reasonably described as largely off the shelf components housed in clever 3D printed enclosures. He recalled a particularly interesting project where an exceptionally dedicated security researcher asked him to design a printed enclosure which would allow them to sneak a Raspberry Pi Zero into a facility where they would be thoroughly searched. Visualizing the mechanics of such a device will be left as an exercise for the reader, but let’s just say it’s a good thing the Pi Zero is so small.

While the talk mainly focused on the external look and feel of the gadgets he designs, El Kentaro did have a few words of wisdom that mirrored what Mike and Russell had said earlier in the day. Namely, be very careful when sourcing your components. He told those in attendance about his HackerChip project, which aimed to turn the diminutive $9 Linux computer into a mobile penetration testing toolkit. The project gained popularity, but as readers of Hackaday will no doubt recall, the company which was producing the C.H.I.P went under and prices for the computer on the second hand market skyrocketed. Now he says he doesn’t use anything that can’t be sourced on Amazon for designs he plans on releasing to the public.

Stories From the Front Lines

It being their first year, the WOPR Summit didn’t have any recording setup this time around for the presentations. That’s always unfortunate, as there’s really no substitute for being able to see these individuals speak about subjects they’re truly passionate about. Though to be fair, a four hour workshop wouldn’t translate particularly well to YouTube.

To that end, anyone who wants to get serious about building something amazing would do well to attend these types of events in person. Even if there’s no hacker or hardware design conventions in your area, see if there’s at least a hackerspace within a reasonable distance. It’s true that the Internet holds an incredible amount of information on literally every subject imaginable, but sometimes it pays to come out of your comfort zone and meet some folks face to face. You might be surprised by what you learn, or maybe, by what you teach.