The true story of pirate radio is a complicated fight over the airwaves. Maybe you have a picture in your mind of some kid in his mom’s basement playing records, but the pirate stations we are thinking about — Radio Caroline and Radio Northsea International — were major business operations. They were perfectly ordinary radio stations except they operated from ships at sea to avoid falling under the jurisdiction of a particular government.

Back then many governments were not particularly fond of rock music. People wanted it though, and because people did, advertisers wanted to capitalize on it. When people want to spend money but can’t, entrepreneurs will find a way to deliver what is desired. That’s exactly what happened.

Of course, if that’s all there was to it, this wouldn’t be interesting. But the story is one of intrigue with armed boardings, distress calls interrupting music programs, and fire bombings. Most radio stations don’t have to deal with those events. Surprisingly, at least one of these iconic stations is still around — in a manner of speaking, anyway. 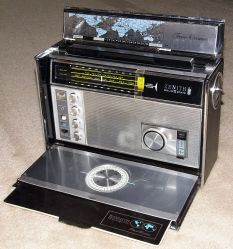 In 1964, Ronan O’Rahilly decided there was a market in the United Kingdom for rock music. O’Rahilly — an Irish musician manager — was frustrated he could not get airplay for artists he represented. The major record labels had control of the limited amount of rock programming allocated on government-sanctioned stations. His solution was to start his own radio station. However, in the UK only the government — the BBC — were permitted to broadcast radio programs. Britain didn’t open up the airwaves to domestic competitors until 1973. If O’Rahily were only going to do shortwave, he might have opened a station anywhere, but the first broadcasts were on the AM band (1520 kHz) so the transmitter needed to be close to the intended audience.

The solution was to put the transmitter on a ship and keep it in international waters near the intended audience. This wasn’t a new idea. Stations operating outside the law sprung up almost as soon as there were laws. Radio Mercur was the first known case of high-seas broadcast radio, operating off the coast of Denmark in 1958. Even some legitimate broadcasters — like the Voice of America — used a ship to put transmitters near the Eastern Bloc as early as 1952. Anchored off the coast of Greece, they had the Greek government’s permission to be there. So despite Moscow’s feelings about the matter, they were not technically pirates.

However, the situation in the UK was even more complex. The government required, at that time, a license fee for a radio receiver. Part of that license prohibits the licensee from listening to unauthorized — well, perhaps unauthorised, since it is English — broadcasts. So, in theory, just listening to a radio station in another country like the popular Radio Luxembourg, was technically against the law. This wasn’t really enforceable. As an aside, the radio set license ended in 1971, but there is still a license required for TV sets today.

O’Rahilly wasn’t the only one who noticed the gap between public demand and the radio monopoly. Radio Atlanta was struggling to beat O’Rahilly to be the first on the air.

O’Rahilly took on six investors and bought a 702 ton passenger ferry, the Fredericia. It was fitted out for radio service, rechristened the MV Caroline, and anchored off Felixstowe in 1964 to begin broadcasts. Project Atlanta was working on the MV Mi Amigo. However, the two ventures merged and the Mi Amigo started broadcasting as Radio Caroline South while the Caroline became Radio Caroline North, moving to the waters off the Isle of Man. This allowed coverage of most of the UK. The two stations sometimes played the same prerecorded programming.

The audience for Radio Caroline quickly topped 10 million. After merging with project Atlanta, Radio Caroline South was losing audience to Radio London, another pirate station launched by a Texan, Don Pierson, after reading about Radio Caroline and Atlanta. Radio London operated from MV Galaxy, a former U.S. Navy minesweeper. You can watch a movie short from around that time where a film crew visited the Caroline below.

The merger between Caroline and Atlanta had left O’Rahilly with a co-director, Allan Crawford. O’Rahilly bought out Crawford and set out to regain audience from Radio London. An increase in power and change of frequency succeeded, and Caroline’s audience exceeded 23 million.

When the movie cameras arrived a year later, there was no doubt that radio Caroline was a success. You can see the video below, which oddly reminded us of a Beatles movie.

So far, the story just sounds like some slightly shady business dealings. However, a pirate station, Radio City, operating from a marine fort off the coast of Kent caused the first real legal problems. Radio Caroline wanted to acquire Radio City and one of Caroline’s directors — Oliver Smedley — made a deal with Radio City’s Reginald Calvert to upgrade the station’s transmitter. However, the transmitter didn’t work out and the deal fell apart. Smedley sent ten men to recover the transmitter. Calvert went to Smedley’s home to demand the men leave. A violent struggle ensued leaving Calvert shot dead.

Initially, Smedley was charged with murder, but this was eventually reduced to manslaughter and at trial, a jury acquitted him.

In 1967 the UK made it illegal to supply or purchase advertising from the illegal pirate broadcasters. Reasons cited included interference to other ships, not paying royalties to record companies, and violation of international agreements.

This law shut down at least two stations, Radio London and Radio 270. Radio Caroline just moved their supply operations to the Netherlands which didn’t pass a law prohibiting commerce with pirate broadcasters until 1974.

Radio Caroline was getting resupply from the Netherlands, but they apparently failed to pay some of their bills. Early 1968, the ships were boarded and towed to the Netherlands because of non-payment, causing the station to go silent. At about the same time a few land-based pirate stations without the reach of the large ship-based transmitters began using the Radio Caroline name.

The real drama, however, came aboard another pirate station: Radio North Sea International (RNI). RNI started as an attempt to use the Galaxy (the old Radio London ship) to start another radio station. That project didn’t make it, but it did lead to the building of the Mebo II which by 1970 was anchored in international waters near Clacton. She could broadcast on four different frequencies at once, including FM and shortwave. The huge transmitters were capable of 105 kW, although typically ran at about 60 kW. You can see a 1970 news report about RNI, below.

During the 1970 general election the UK government, controlled by the Labour party at the time, started jamming RNI. RNI briefly changed their name to Radio Caroline International (with O’Rahilly’s support), and started a vigorous political campaign for the Conservative party who supported commercial radio. After the election, RNI changed its name back, but jamming continued. There was some innuendo that RNI was broadcasting coded messages to East Germany, although that’s far from certain.

But it was late 1970 when the attacks went beyond the electronic. A failed deal with a nightclub owner named Manders went very wrong. It isn’t clear exactly what caused it, but Manders showed up with a tug boat. He approached the Mebo II in a launch, reportedly carrying a woman and a child to deter attacks.

DJs for the station made breaks in programming to report they were under attack and asked listeners to phone their main office to report it. Remember, there were no satellite phones in 1970. The tug threatened to spray water on the antenna until the Mebo II crew told them it would electrocute everyone on the tug. That seems unlikely, but it did deter them from trying it. Eventually, the tug departed, but a Dutch Navy frigate came alongside.

Radio Veronica, another offshore station which was popular in the Netherlands, were afraid all this drama would lead to the Dutch government shutting them down. Their solution was to pay off RNI with about 100,000 pounds to shut down. That deal lasted for four months and then RNI resumed in both English and Dutch. But that wasn’t all the drama in store for RNI.

Have you ever been listening to music and the DJ stops the song to call mayday? Me neither. But that’s what happened on May 15, 1971 if you were listening to RNI. A small boat came alongside Mebo II and threw a bomb which started a fire.

Mebo II was abandoned overnight and required repairs at sea. Three men were arrested in Amsterdam in relation to the bombing, with two subsequent arrests of people associated with Radio Veronica. Apparently, Radio Veronica had paid to force Mebo II out of international waters, where the crew could be arrested or the ship seized by creditors. This led to a year in prison for the perpetrators and also a law preventing the supply of pirate radio ships from the Netherlands.

RNI operated through most of 1974, but finally went off the air for good. The ships were eventually sold to Libya where they continued to broadcast until the 1980s when the Libyan Navy sank them for target practice. 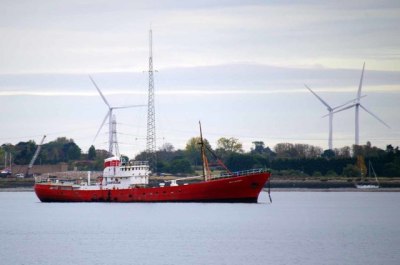 So was that really the end of pirate radio? Not exactly. Radio Caroline survives today as an Internet stream, and they have dabbled in satellite radio. You can read their version of their history on their web site. In 2017, Radio Caroline went legit with a real AM radio license. If you aren’t close enough to pick up Bradwell-on-Sea with your transistor radio, there’s always Radio Garden.

There’s also a current website for RNI, although it looks like it is really just an homage started by Garry Stevens in 2008. As of 2016, the station is now run by Zhang Yong in China. You can listen to it streaming, and apparently in some parts of the world on AM and FM. If you are interested in shipboard broadcast stations, you can find a comprehensive treatment on the Broadcast Fleet website. It even includes legal ships.

32 thoughts on “Radio Piracy On The High Seas: Commercial Demand For Taboo Music”