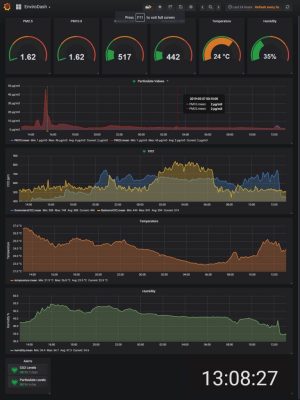 Commuting through the urban sprawl of a 21st century city brings exposure to significant quantities of pollution. For a Medway Makers member that meant the Isle of Dogs, London, and a drive through the Blackwall Tunnel under the Thames. When you can taste the pollution in the air it’s evident that this isn’t the best environment to be in, but just how bad is it? Time to put together an environmental monitoring and recording rig.

Into the build went an ESP32 module, an SPS30 particulate sensor, an MH-Z19 CO₂ sensor, an HTU21D temperature and humidity sensor, and a uBlox NEO 6M GPS module. The eventual plan is to add an SD card for data logging, but in the absence of that it connects to a Raspberry Pi running Grafana over InfluxDB for data analysis. The result provides a surprising insight into the environmental quality of not just a commute but of indoor life. We’re sorry to say that they don’t seem to have posted any of the code involved onto the Medway Makers writeup, though we hope that’s an oversight they’ll rectify by the time this has gone live.

This isn’t the first environmental monitor to grace these pages, indeed we’ve had quite a few as Hackaday Prize entries.

17 thoughts on “Monitor The Pollution On Your Commute”