There’s a lot of history about RCA and its roots with the radio alternator. You can power through that section and then you get into a lesson about how phonograph records work. After all, RCA’s concept was to create a record player for video. The technical challenge, of course, is that an audio record only needs about 20 kHz of bandwidth. A video record has to hold hundreds of times that amount of data. The SelectaVision system held about 60 minutes of 3 MHz video on each side of the large platters. 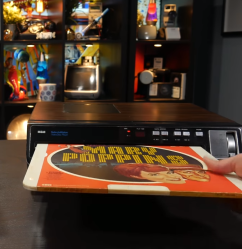 Starting in 1964, by 1972 they realized they couldn’t use a standard vinyl record and even with the fragile metallized discs they were only holding about 10 minutes of video. By 1981, they had holders for the discs that could hold an hour per side. You had to shell out $500 for the player — about $1,500 in today’s money. Steep, but many readers will have paid that much for a tech gadget. The discs were about $20.

The problem of course is that the VCR — while more expensive — had four-hour tapes and had been available since the late 1970s. RCA even had its own line of VCRs called — unsurprisingly — SelectaVision. People were able to record on the VCR which made more sense, especially since there weren’t always prerecorded options for everything.

If you want to jump right to the teardown, slide over to around the 15 minute mark. The player wasn’t very complex. It is little more than a 450 RPM record player with a special pickup. That pickup used a titanium electrode that measured changes in the capacitance between the conductive disc and the pickup electrode. The discs were PVC made conductive with carbon. The depth of the groove controlled the capacitance and the player used that to generate the video signal.

If you remember records, they were prone to getting stuck, requiring a good swift kick. The player could actually kick itself using an electromagnet because it did happen pretty often. Many of the discs haven’t aged well.

We are looking forward to part two which is due out any day now. Now if you don’t mind having very short videos, you have other options. If you think the road to videotape in the home was easy, think again.