Quick, name someone influential in the history of radio. Who do did you think of? Marconi? Tesla? Armstrong? Hertz? Perhaps Sarnoff? We bet only a handful would have said Reginald Fessenden. That’s a shame because he was the first to do something that most of us do every day.

Few know this Canadian inventor’s name even though he developed quite a few innovations. Unlike Colpitts and Hartley we don’t have anything named after him. However, Fessenden was the first man to make a two-way transatlantic radio contact (Marconi’s was one way) and he was a pioneer in using voice over the radio.

He did even more than that. He patented transmitting with a continuous wave instead of a spark, which made modern radio practical. This was unpopular at the time because most thought the spark was necessary to generate enough energy. In 1906, John Fleming (who gave us tubes that are sometimes still called Fleming valves) wrote that “a simple sine-curve would not be likely to produce the required effect.” That was in 1906, five years after Fessenden’s patent.

Start at the Beginning 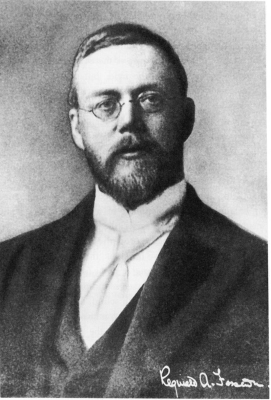 Reginald Fessenden was born in Quebec in 1866. He dropped out of Bishop’s College at 18 even though he had essentially completed his degree, to take a job in Bermuda teaching. Eventually, he would move to New York City hoping to work for Thomas Edison. This didn’t work out at first because he didn’t know much about electricity at the time, but he was persistent. He kept hanging around one of Edison’s machine shops and one day an instrument tester walked off the job. Desperate, the foreman hired him on the spot.

Once in Edison’s employ, his math skills and troubleshooting skills led to him quickly rising, finally working directly for Edison in New Jersey as a junior technician. He actually asked Edison if he could research wireless. The boss was agreeable but asked him to wait until he returned from Europe.

Before Edison could return, however, he was forced to lay off most of his laboratory employees, including Fessenden. Armed with practical experience, he found several jobs before winding up as a professor at Purdue. There his work came to the attention of George Westinghouse who personally recruited him to be the chair of the electrical engineering department at the Western University of Pennsylvania in Pittsburgh (now the University of Pittsburgh).

About this time, Marconi was in the news for developing a practical wireless transmission system using spark gaps and coherers to send Morse code. Fessenden started experimenting and realized he could do better. By 1899 he had sent messages between Pittsburgh and Allegheny City, using a receiver he designed. In particular, he had been critical of the coherer developed by Lodge and Marconi because it did not lend itself to measurements that could tie the observed radio effects to electromagnetic theory. A properly adjusted coherer acts like a switch. It is either on or off.  That made it difficult to compare two signals if both of them were strong enough to set off the detector. This made it difficult to compare antennas or transmitters, especially since the antennas and receivers of the day were hardly portable.

In a talk in 1899, Fessenden showed three different detectors he had been working on. They were sensitive and able to produce a measure of signal strength. He also understood resonance from experiments he’d conducted earlier with multiplex telegraph systems that use various frequencies. He understood that the broad signal produced by a spark was not suitable for tuning and wanted to find a way to make higher frequencies that were constant and not ringing like the decay of a spark. This all sounds ordinary today, but remember, Marconi’s system operated at about 8 Hz and the sparks were throwing lots of harmonics and decaying down to zero on each pulse.

Working for the United States Weather Bureau, Fessenden would invent the barretter detector that demodulated radio waves using a hot platinum wire prepared with acid. He followed this up with the popular (at the time) electrolytic detector that used the same kind of wire, but kept it in the acid during operation.

You might wonder why we care about two old-fashioned radio detectors. There were two things of interest here. First, keep in mind this is before tubes, so there was no amplification available. More sensitive detectors were crucial in making radio more useful. In addition, these detectors could detect amplitude not just on and off like a coherer. Not only did this enable the scientific measurements Fessenden wanted, it also enabled AM radio.

By using a carbon microphone in the transmission line, Fessenden was able to successfully transmit voice on Cobb Island in the Potomac River near Washington DC. The distance was only about a mile and the audio quality was not suitable for practical use, but it is considered the first transmission of speech. The message was reportedly:

“One, two, three, four. Is it snowing where you are Mr. Thiessen? If it is, telegraph back and let me know.” 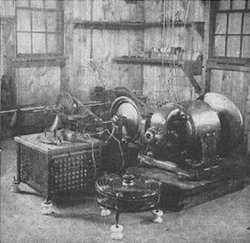 Fessenden kept experimenting with alternators (like the one on the right) and increasing their frequency. He had alternators that would go as high as 50 Hz, but with no amplification, it was difficult to get good results. However, he did have some success and even prophetically, connected the radio to the telephone network.

There were reports that some of the audio tests were even accidentally heard in the Scottish sister station set up by Fessenden’s new company. By 1906 he patented a system for measuring the distance to icebergs using radio waves — similar to modern radar. It was also used during wartime to detect submarines. 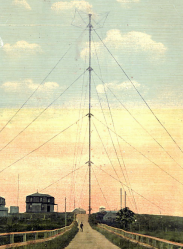 Christmas Eve of 1906, Fessenden’s station at Brant Rock, Massachusetts sent CQ using Morse code. Then, he used a microphone to announce the show followed by a gramophone playing Handel’s Largo. He also personally played the violin, rendering O Holy Night. Then he wished his listeners a merry Christmas. Some others were to speak, but they suffered what could be the first case of mic fright, or so it is reported.

That was the first entertainment broadcast known to occur. It didn’t get as much publicity as Lee De Forest’s broadcast a few months later. Between connecting radio and telephone, and using broadcasts for entertainment, you can conclude that our inventor had a pretty good crystal ball. He certainly had a big antenna, as you can see on the left.

You can hear a reproduction of the original Christmas program in this video:

Fessenden was clearly a smart guy. There are some records that indicate he was quite vain and didn’t treat employees with much respect. He supposedly had a nasty temper.  You can never be sure with these figures — especially ones that aren’t as well-known as some others — how much of that is true and how much is an exaggeration.

One thing is for sure, though. While Fessenden built much of the foundation for radiotelephony, he didn’t have a lot of financial success. The company that sponsored most of his work, dismissed him in 1911, leading to a protracted court battle.  The company was eventually sold to RCA who settled the case.

He continued to work, but not on radio. He wound up with over 500 patents. He also became eccentric, causing Radio News, a magazine, to eventually stop carrying his serialized autobiography. He died in 1932 at his home he had bought with settlement money in Bermuda. His burial vault bears the words:

By his genius distant lands converse and men sail unafraid upon the deep.

A great sentiment. A shame so few remember him. On the other hand, he did get his own ballad.

30 thoughts on “You All Know Reginald Fessenden. Who?”