Typically, we associate Vespas with Italians, riding their posh scooters midday under the heat of the Mediterranean sun. In one community, however, the riders and vehicles are pretty different – and by that we mean a whole lot different. Think Mad Max: Fury Road meets The Jungle Book.

The first Vespa arrived in Indonesia in the 1960s when the vehicles were rewarded to Indonesian peacekeepers returning from a mission in Africa. While many of the Vespas on the archipelago maintain the same classic style, some riders have modified theirs into entirely new conceptions. 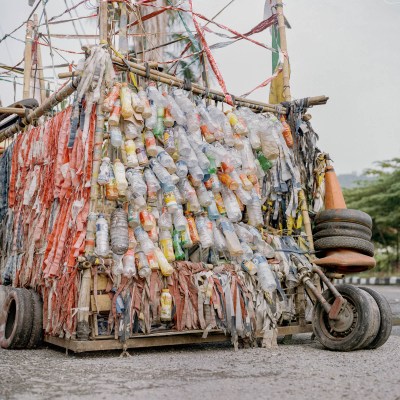 Indonesian photographer [Muhammad Fadli] captures these riders on their Vespa sampah (“garbage Vespa”) and Vespa gembel (“Vespa drifter”), as they are known by locals. The unique design of the riders is partially attributed to their emergence in the early 2000s coinciding with the fall of the Soeharto authoritarian regime. The newfound freedom and self expression, as well as the relaxed law enforcement, contributed to the development of new types of modified vehicles on the road.

While the scooters are widespread, there isn’t any known count of extreme Vespas in the country. Most of the Vespas are not meant for riding, but rather to show off their physical form. While some are made from cheap steel frames and tires, others are adorned with road scraps and symbols. Anything from buffalo skeletons to machine gun rounds are used to accentuate the design of the scooters, many of which have a punk or metal vibe.

Within the community, there are annual extreme Vespa gatherings, which can draw thousands of riders from all over Indonesia. From frames made of bamboo to frames made of garbage, stalls that collect recyclables to add to their vehicles, and riders from all walks of life, there’s no apparent limit to the builders’ creativity.

[Thanks edmonkey for the tip!]