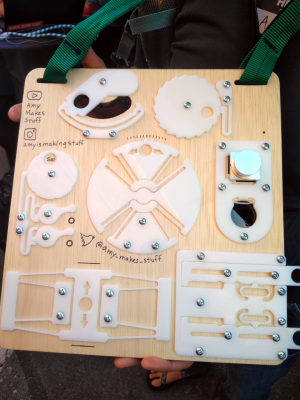 Awesome Stuff Hanging Off of People

Hanging around every neck was a Hackaday or Adafruit badge (or both!) in various stages of hacked-ness. But we want to give a shout-out to some of the other things people were wearing around like the badges of honor they are.

I was so glad that I encountered [Amy Qian] and her amazing array of flexure examples. [Amy], a mechanical engineer by day, gave a workshop on these flexible mechanisms she designed, including one that functions as a cat feeding schedule. Those lucky enough to attend got to make their own gripper mechanism out of laser-cut Delrin.

By wearing this board full of examples around the Supercon village, [Amy]’s reach extended to anyone curious enough to ask about them.

[Craig Bishop]’s big, beautiful Gameslab stopped me in my tracks, as I’m sure it did everyone who laid eyes on it. This labor of love started coming to life when [Craig] was able to source a handful of huge, expensive FPGA chips for a lot less than usual. Here are some pictures of the beautiful v1.0 guts. 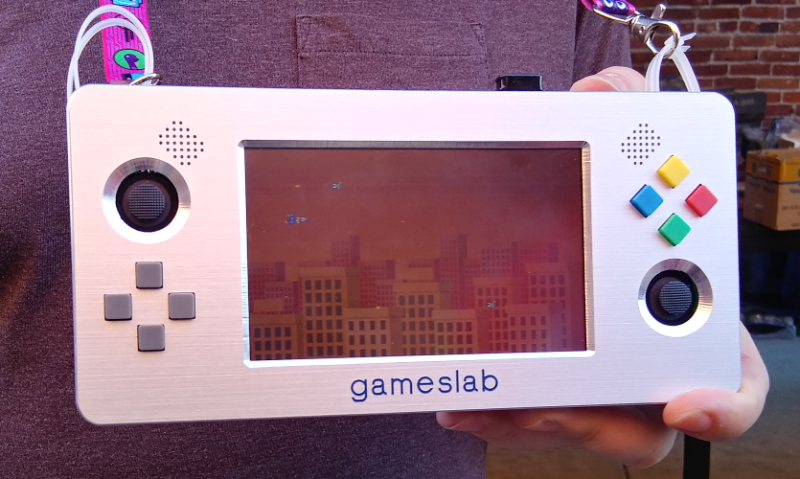 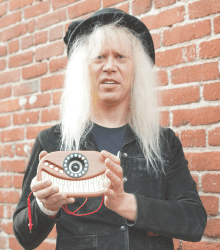 Last fall, we showed you [Tim Trzepacz]’s Stylish!, a sweet little synth that looks like a cyclops with a Cheshire grin. Back then, we could only show you the render.

[Tim] originally designed this as a short run of premium swag badges for MAGWest,  each in a lovely handmade wooden case, and he was walking around with one of these rare beasts clipped to his waist like a cowboy belt buckle. It was super cool just to see it in person, but then [Tim] kicked it up a notch and gave us a screamin’ demo.

A Carnival of Amazing Things

Besides the hardware being worn on a lanyard, there was a steady parade of items pulled out of backpacks, wheeled in on carts, or driven into Supercon under their own power. Some were even source from local party stores and thrift shops, performing into fantastic things I saw and/or played with.

I like big badge hacks and I cannot lie. [RobotGrrl] spent her time in the badge hacking area using everything from the swag bag poster tube to plastic utensils to six-packs of snack crackers to build a tree-planting robot driven by her Adafruit edge badge. In autonomous mode, the ‘bot will search for well-lit locales to plant its payload. Once it finds a place in the sun, the robot requests confirmation from a human, who would respond with a yes or no via Tensorflow voice commands.

Elsewhere in the Hacker Village, [Chris Gervang] was piloting a very different vehicle. After taking the logic noise synthesizer workshop hosted by [Elliot Williams] he turned the Verilog tricks he learned toward the IRDA transceiver on the badge. Of course with infrared working he wanted something to control and found that in the form of this large remote-controlled shark balloon sourced at a local party supply store. He and [Thomas Sarlandie] got to work and before long, started driving the shark around with a Supercon badge. With badge hacks like these, you’re gonna need a bigger venue.

[Josh]’s BeagleBone-based stenography keyboard will not play the theme from Jaws, unless he turns it into a MIDI device. What it will do is support a bunch of different dictionaries for different contexts thanks to an SD card slot. If it could do both, it would be the keyboard of my dreams.

To drive home a sense of the eclectic seen at every turn, check out this quartet of oddities.

It seems that our love for LEDs will never dim, just burn brighter with each step forward in blinky technology. Here are just a few of the projects that lit up the balmy November nights of this year’s Supercon.

Every time I saw [Greg Davill] and his dazzling LED polyhedra, a crowd was gathered around to marvel at their complexity. Sure, [Greg] could have used pre-made LED panels, but picking and placing each one by hand is a sure route to mad respect and piles of internet points. How does he get back under the hood? The last panel attaches to the metal frame with magnets. This image is from a particularly awesome meeting of the dense LED panel minds.

[Kristin Paget]’s Pixel Flinger lit up the tents of the Hacker Village where everyone was busy pushing their badges to the limit. It’s made of a whole bunch of RGB LED panels that are networked together with six ESP8266s. These out of sync rainbows indicate some kind of a network issue that might have been caused by interference. [Kristin]’s hopes for it never dimmed, and neither did ours. Since we live in the future, she was able to throw money at the problem, and had a new router delivered directly to Supercon later that day. The router solution worked so well that [Kristin] was able to show Finding Nemo on it. 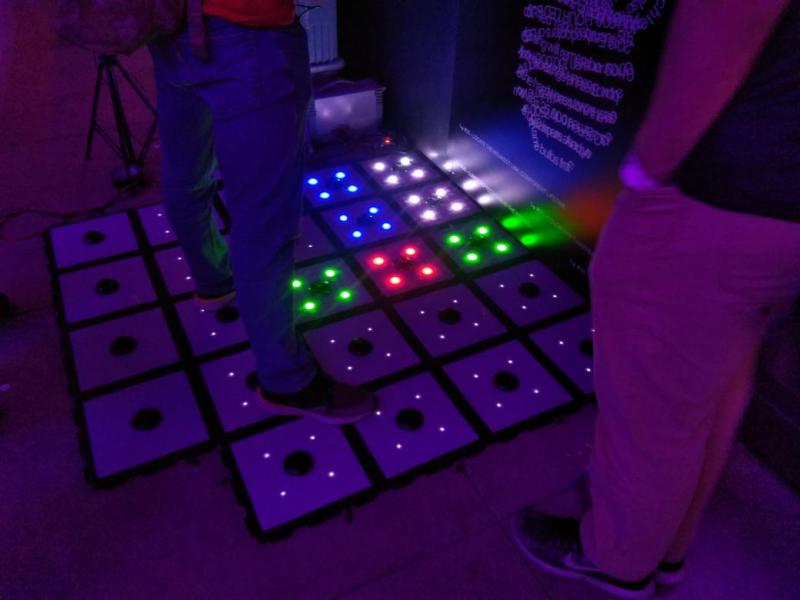 Saturday night after the Hackaday Prize ceremony concluded, it was time to get down. There were rented arcade cabinets and a DJ, but the biggest draw inside the Design Lab was the game [John McMaster] contributed —  a colorful marriage of Minesweeper and DDR. Step on a tile’s lamp-style switch, and if you’re lucky, it comes up blue, green, or red. And just like the computer version, blue stands for 1, green for 2, and red for 3 (it maxes out at 3). [John] had a big bag of champagne poppers on hand for explosions.

The Badger Badge – edge-lit acrylic badger dances to internal mp3 like no one is watching.

This twinkly LED jacket added sparkle to the evenings

We were go for creativity in the badge hacking area.

The Shitty Add-On wall was anything but.

The Stuff You Wish You’d Brought

I went around asking people what they wish they’d brought, and I have to agree with most of the answers. The number one answer centered around that great intangible resource: time. Many people wanted more time to prepare for Supercon, and basically everyone wanted much more time at Supercon.

Some people wished they had brought their current project to work on, and that’s totally relatable. After all, what better place than this gathering of great international minds is there to squash the bugs? [Joshua Vasquez] told me he wished he’d brought more screws, and the Digi-Key guys wanted a way to get extras of the more popular parts in their bins.

Some people wanted to have their own soldering iron and tools, but there is only so much luggage a person can carry. Yours truly would have packed some shorts, because that California sunshine is no joke, even in November. Now I’m back in the dreary Midwest, dreaming of next year.

3 thoughts on “Supercon: The Things You Brought, And A Few You Forgot”