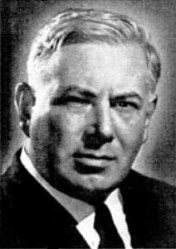 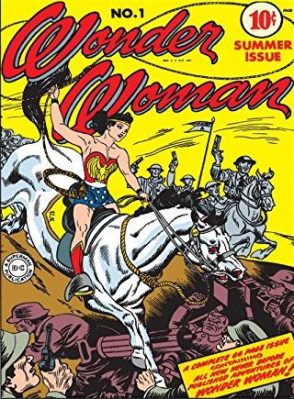 The real wonder of Wonder Woman is that she exists at all. In 1942, a powerful female superhero was a pretty bold marketing risk. The fact that she was “not sufficiently dressed” (as one critic reported) didn’t help, either. Comic books were still relatively new media in 1942. Superman dates back to 1938 and Batman to 1939. Some would argue there weren’t any modern comic books before 1933 when Maxwell Gaines devised the first four-color saddle-stitched newsprint magazine. Like all new media, the old media was not amused. Respected newspapers called them “sex-horror serials” and a “national disgrace.”

Granted, in the 1940’s comics did have a lot of things that were objectionable. Female characters were often relegated to the “Damsel in Distress” plotline. Tied down to railroad tracks or at threat of being burnt at the stake, the hero would arrive in the nick of time and save the day so you never actually dealt with the burned or dismembered corpse of the heroine.

With the Wonder Woman comic, Marston set out to break this tired mold. In 1940, a reporter named Olive Richard interviewed Marston who said he saw “great educational potential” in comic books. This comment caught the attention of  Maxwell Gaines who ran All-American Comics, along with the co-owner of Detective Comics (which would become DC), Harry Donenfield. The two comic publishers maintained close relations until Donenfeld bought out Gaines in 1946. In 1940, Gaines decided to create an editorial advisory board and hired Marston to serve on it. New to the comic scene, Marston was already well-known in other fields.

Truth, Behavior, and the Origins of Wonder Woman

To say William Marston had an unconventional life is like saying Jupiter is large. He had three degrees from Harvard, one a PhD in psychology. He had worked as a lawyer and as a professor. In 1928 he wrote a paper about DISC theory, which formed the basis for an early behavioral assessment test. 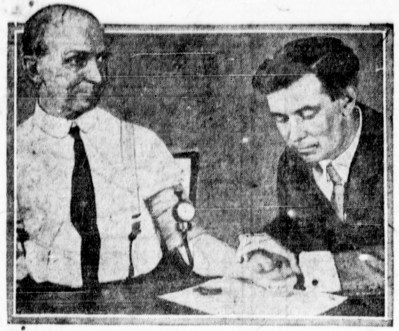 Marston’s wife Elizabeth Halloway Marston, herself an attorney and psychologist, once observed that when she got mad or excited her blood pressure would go up. This led William to experiment with observing blood pressure changes as an indicator of prevarication (a sneaky lie). This became one part of the modern polygraph, created by John Larson.

Marston did a lot of work with the polygraph, trying to commercialize it. As a result of his work, he became convinced that women were more honest than men and he also thought they could work faster and more accurately at many jobs. This was pretty radical thinking for the 1930s.

While Elizabeth was instrumental in suggesting the link between telling a lie and blood pressure, there was another woman in William’s life, too. In 1925, William was Olive Byrne’s psychology professor at Tufts University. They fell in love and William gave his wife an ultimatum. Olive would come to live with them or he would leave her to be with her. While a polyamorous relationship isn’t that scandalous these days, in 1925 it was not something most people would even think about. They lived as a family and Marston had two children with each woman. The Marston’s officially adopted Byrne’s children, doubtlessly for legal reasons.

Oh, and Olive Byrne’s pen name was Olive Richard: the same person who wrote the interview that brought Marston to the attention of comic book publisher Gaines. Even after Marston’s death, the women continued to live together as a family.

As part of the editorial board, Marston noted that the biggest problem with comics was their “blood-curdling masculinity.” He apparently shared with Elizabeth that he envisioned a superhero that would conquer with love instead of fists or firepower. Elizabeth suggested he make her a woman. Gaines was receptive to the idea. However, he told Marston he’d have to write the strip himself.

Marston developed Wonder Woman as a powerful female lead modeled partly after Elizabeth and William’s life partner Olive. In the comics, Wonder Woman was given a golden lasso. While bound with it, anyone was compelled to tell her the truth and do as she commanded. The lasso worked much better than a polygraph — actually compelling the person to tell the truth — but the influence is clear.

The modern polygraph uses blood pressure as one test out of many. Marston actually wasn’t the first to attempt this. In 1895, Cesare Lombroso tried the same thing with some success. Marston’s own work was on German prisoners of war and showed a strong correlation between lying and systolic blood pressure. 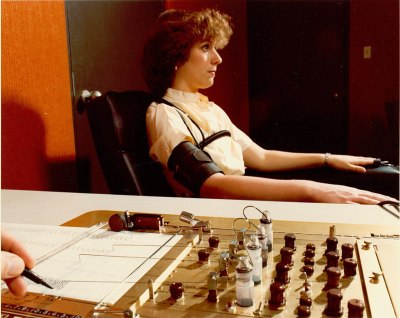 Other items polygraphs can measure include breathing, pulse, galvanic skin response, and muscular activity. The subject is asked a set of pretest questions to establish a baseline and measure reactions when the subject is being deceptive. Responses are then recorded during the interview and compared to the pretest measurements.

Does it work? It apparently does, but not universally. There are many instances of people lying yet passing polygraph tests. There is also a fear of false positives, and there have been many high profile cases of that, too. For these reasons, polygraph tests are usually inadmissible in court.

Some think that the way an examiner administers the test can cause enough anxiety in an innocent person to sway the test and there are methods for attempting to negate that effect. In Japan, for example, the examiner doesn’t know the details of the crime and asks questions in multiple choice format. The examiner isn’t really looking at the answers, but the reaction to the potential answers which can then match up with the known correct answers.

Sometimes, though, just the idea of a polygraph is enough to compel people to tell the truth. This is sometimes known as the “bogus pipeline” where a researcher will connect a subject to meaningless wires and told it is a polygraph. People are apparently less likely to lie in that situation.

Cleve Backster was a polygraph operator with the CIA. He used the machine to show that plants feel pain and have ESP. Of course, the scientific community didn’t find his experiments compelling.

There are several other lie detection technologies and strategies ranging from microexpression analysis, the silent talker detector, and voice stress analysis. We can’t help but wonder if anyone has just thought about feeding a bunch of videos into a machine learning system. We certainly have plenty of videos of people lying. Being sure about the truthful videos might be a little harder.

Meanwhile, next time you see Wonder Woman use her lasso of truth, you’ll think about the unconventional Dr. Marston and his connection to the lie detector. Not to mention the visionary creation of a female superhero at a time when that was almost unthinkable.

33 thoughts on “Wonder Woman And The Real Lasso Of Truth”