If you ask most people who invented the mouse, they won’t know. Those that do know, will say that Doug Englebart did. In 1964 he had a box with two wheels that worked like a modern mouse as part of his work at Stanford Research Institute. There is a famous demo video from 1968 of him showing off what looks a lot like an old Mcintosh computer. Turns out, two other people may have an earlier claim to a mouse — or, at least, a trackball. So why did you never hear about those?

Ralph Benjamin worked for Britain’s Royal Navy, developing radar tracking systems for warships. Right after World War II, Ralph was working on the Comprehensive Display System — a way for ships to monitor attacking aircraft on a grid. They used a “ball tracker.” Unlike Engelbart’s mouse, it used a metallic ball riding on rubber-coated wheels. This is more like a modern non-optical mouse, although the ball tracker had you slide your hand across the ball instead of the other way around. Sort of a trackball arrangement. 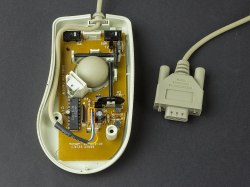 Turns out, the navy preferred a joystick and the work was all secret. Ralph went on to important positions with GCHQ and NATO, and while he got no credit, he reportedly was pleased that people were using a device he thought of, even if they didn’t learn about it from his invention.

You could argue this device didn’t have a lot in common with a modern mouse but look at the photo of the inside of an old serial mouse. There’s a ball. Little wheels move as the ball moves and photosensors detect the motion and direction of the little wheels. Flipped over, this is a simple trackball.

Although it was secret from the public, Canadian engineers working for Ferranti Canada had a chance to see the system and in 1949 started working on DATAR — a system attempting to build a common operation picture from sensor data across a naval task force.

They built a trackball similar to the one Ralph had, although their choice of balls was a Canadian five-pin bowling ball. If you are unfamiliar with this variation of bowling, the balls are small enough to fit in one hand and, thus, usually have no finger holes.

DATAR was a success and everyone who saw it was impressed. However, no one wanted to go in with the Royal Canadian Navy and they could not bear the cost alone. Despite building a successful prototype in four years, the program ended.

The DATAR trackball used two X disks and two Y disks. The disks made mechanical contact with wires and counting pulses allowed the system to understand the ball’s position. Once again, the project was secret, so not many people saw one of these in action. 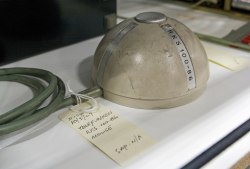 Despite all of this early activity, it would be 1965 or 1966 before commercial trackballs showed up. The German company Telefunken offered a trackball in 1965 and by 1968 had realized you could flip it upside down to create what we’d call a mouse. They called both devices the RKS 100-86 and you can see it in the adjacent photo.

From Theory to Practice 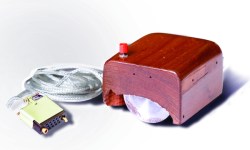 The mouse we know is a far cry from an RKS 100-86 or Engelbart’s original mouse (see the adjacent photo).

Today’s mouse probably has a laser sensor and a raft of buttons. But the idea is still the same: provide a high-resolution way to point at something on the screen and take action on it.

There are alternatives. The trackball is still around and favored by hardcore touch typists. There are trackpads and some laptops have the little eraser knobs. There’s touchscreens and a vanishing number of light pens. But the mouse has survived the test of time to be the predominant way we interact with screens. Not bad for a trackball turned upside-down.

And if you’ve never seen the 1968 “Mother of all Demos” from Engelbart showing wordprocessing, instant messaging, hyperlinks, an awesome function keypad, and — of course — the mouse in use, you can find it in the video below.

40 thoughts on “Who Invented The Mouse? Are You Sure?”