If you haven’t noticed, this is an absolutely fantastic time to be a hacker. The components are cheap, the software is usually free, and there’s so much information floating around online about how to pull it all together that even beginners can produce incredible projects their first time out of the gate. It’s no exaggeration to say that we’re seeing projects today which would have been all but impossible for an individual to pull off ten years ago.

But how did we get here, and perhaps more importantly, where are we going next? While we might arguably be in the Golden Age of DIY, creative folks putting together their own hardware and software is certainly nothing new. As for looking ahead, the hacker and maker movement is showing no signs of slowing down. If anything, we’re just getting started. With a wider array of ever more powerful tools at our disposal, the future is very literally whatever we decide it is.

In her talk at the 2019 Hackaday Superconference, “The Future is Us: Why the Open Source And Hobbyist Community Drive Consumer Products“, Jen Costillo not only presents us with an overview of hacker history thus far, but throws out a few predictions for how the DIY movement will impact the mainstream going forward. It’s always hard to see subtle changes over time, and it’s made even more difficult by the fact that most of us have our noses to the proverbial grindstone most of the time. Her presentation is an excellent way for those of us in the hacking community to take a big step back and look at the paradigm shifts that put such incredible power in the hands of so many.

To get the whole picture, Jen starts all the way back in the 1970s with the Homebrew Computer Club. In those heady days, some of the biggest developments in home computing were literally taking place in hacker’s garages. By the 1980s, the GCC project was in full swing, giving hobbyists their own toolchain to develop and debug software without having to purchase an expensive license. A few short years later, Linus Torvalds made his now iconic post on the comp.os.minix newsgroup looking for feedback on the free “hobby” operating system he’d been working on.

Moving on to the 2000s, we see the rise of Maker culture. Companies like SparkFun and Adafruit pop up to provide high-tech components for DIYers, Makerbot makes it possible for the average consumer to 3D print parts at home, Kickstarter provides an influx of cash to anyone with a good idea, and Maker Faire proves there’s a huge number of people out there who are curious about building things themselves. The stage is set for another revolution in how hardware and software is created, and this time it’s on a scale that would have been inconceivable a few decades prior.

All of these milestones have been critically important for our community, and when presented in a timeline like this, the natural progression towards bigger and better things is clear. But what Jen is really trying to illustrate by plotting them all out is not so much what happened, but when it happened.

The Circle of (Tech) Life

As Jen goes on to explain after presenting this hacker history lesson, many of the formative events that put us where we are today happened during a recession. It seems that when the economy is doing poorly, hackers and makers thrive. 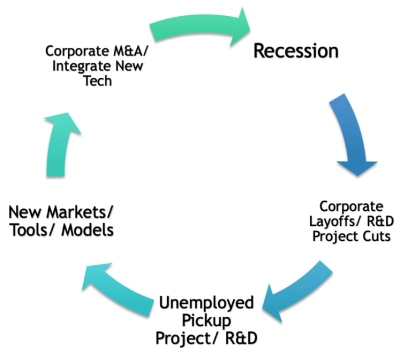 The rationale for the big events is easy enough to understand; when you’ve got a lot of really smart people that are unemployed or underemployed, they’re more likely to throw themselves into the hobby projects that they otherwise might not have had time to work on. For the DIY crowd the reasoning is even more blunt. When the money’s tight, people are more willing to repurpose things than buy new.

But history also tells us that this period doesn’t generally last very long. Pretty soon, the big corporate players get wind of all the incredible things coming out of garages and hackerspaces, and start buying up ideas and hiring up the talent. Once part of the corporate machine, the innovation invariably slows back down, things start getting expensive, and the stage is set for the cycle to start all over again once the money dries up.

If we look closely enough, some of the cracks are already starting to form. Maker Media is struggling to rebrand itself, putting the flagship Maker Faires on indefinite hold. Companies like Facebook, Microsoft, and Samsung are aggressively scouring the community for ideas and talent they can use for their respective virtual and augmented reality projects, which one could argue has slowed the development of hacker-friendly AR and VR headsets.

Preparing for What’s Next

The “Great Recession” that brought us all those incredible maker advancements in the 2000s is now over, and we’re currently enjoying a period of exceptional economic growth. Companies are expanding and buying up ideas, and for those who recognize these sort of trends, there’s an opportunity to cash in.

Jen says that companies today are watching sites like GitHub and Hackaday.io closely for the next great idea, and will often know all about your capabilities before you even agree to an interview. They might be a little more cautious to write the big checks than they were during the last big boom, but the skilled operators and the good ideas are still going to get recognized.

But of course what goes up must come down. Many economists think that we’re only a year or two away from the next downward trend, putting the potential for more layoffs and cautious spending on the horizon. Some even think it will hit before the end of 2020. So if you get a job with that dream startup in the next few months, don’t be completely surprised if it doesn’t last very long.

The plus side of all this is that if we are looking at another recession in the near future, then we’re also likely to see some new developments in the hacker and maker scenes before too long. If the last recession launched the technologies and companies that have allowed us to operate in this hacker utopia for the last few years, we’ll admit to being more than a little interested in seeing what the next one could bring.