We love spacecraft and we definitely love teardowns, especially if they are for vintage devices. [Ken Shirriff] writes about taking apart the digital clock module from the Soviet Soyuz series of spacecraft and there are a lot of interesting bits to the device. After all, it has been into space.

The Soyuz series of spacecraft made their maiden voyage in 1966, and are still flying today. The clock in question comes from somewhere in the middle, around 1996. On the outside, it seems like any spaceship gizmo, and the digital clock keeps local time along with a stopwatch and an alarm function. The guts are much more interesting with no less than 10 PCBs sandwiched inside the small enclosure. 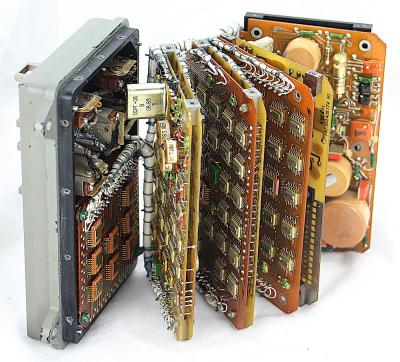 The system consists of dual layer-boards with a mix of SMD and through-hole components that are interconnected by a series of wires that are bunched and packed to create a wiring harness. The pictures show a very clever way of setting up the stack and the system is serviceable by design as the bunch opens up like a book. This gives access to the unique looking components that include 14-pin flat pack chips, large ceramic multicoil inductors, green colored resistors, and orange rectangular diodes.

There are isolated PSU boards, control boards, clock circuitry, some glue logic to put things together, and LED displays with driver circuits. [Ken Shirriff] dives into the clocking circuit and the various parts involved along with a comparison with US technology. There is a lot of interesting detail in these boards, and it may be a source of inspiration for some.

If you are looking for more spaceborne tech, have a look at the one that stowed away on the International Space Station.

Thanks for the tip [Thorsten Eggert]