Looking to sterilize something? Give it a good blast of the old UV-C. Ultraviolet radiation in the shortest wavelength band breaks down DNA and RNA, so it’s a great way to kill off any nasties that are lurking. But how much UV-C are you using? [Akiba] at Hackerfarm has come up with the NukeMeter, a meter that measures the output of their UV-C sterilizer the NukeBox. It is built around a $2.50 sensor and a $3 Arduino. 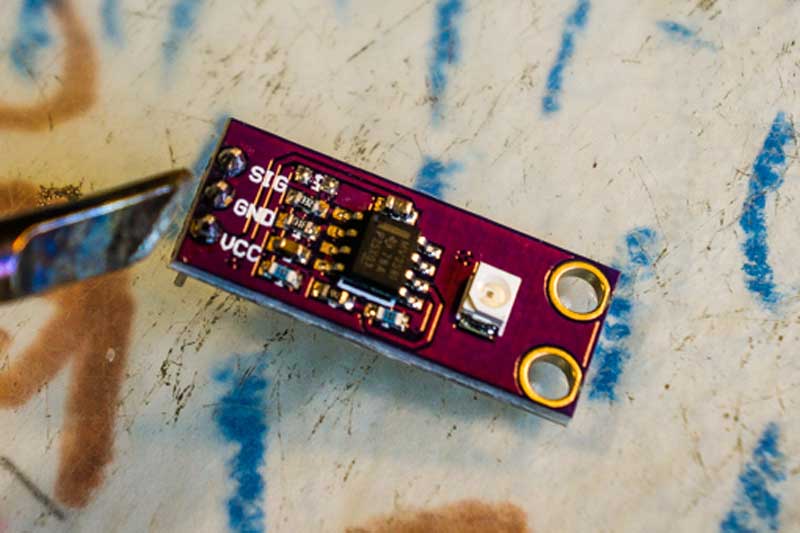 The NukeMeter is built around a GUVA-S12SD UV sensor breakout board. This sensor is really designed for UV-A detection, but a quick look at the spec sheet revealed that it is sensitive to UV across all of the bands. So, it can be used as a UV-C sensor if you know how sensitive it is to this particular frequency band.

However, the sensor is not that sensitive to UV-C light, so [Akiba] had to do a bit of minor surgery on the circuitry that surrounds the sensor to tweak the output. The sensor was designed to measure relatively low levels of UV light (such as sunlight), and now they are blasting it with a shedload of radiation, so they have to effectively disable one of the op-amps that normally scales the output up, which involves replacing a couple of resistors. That’s a bit of a pain to do with surface mount components, but it is doable with a steady hand and a small tip soldering iron.

Next, an Arduino takes the voltage output of the sensor and converts it into a light level. The mathematics of how this works are all well detailed in the post, but it isn’t complicated, and the source code is here.

Using this, [Akiba] was able to measure how the lights performed, how quickly they warmed up and how much the light level varies along the length of the fluorescent tube.

One caveat to bear in mind here: [Akiba] designed this to measure the output of the low-pressure mercury vapor lamps they are using at Hackerfarm, which output a very narrow frequency band, peaking at 250 nM. This design would not work for a more broadband output or for one which mixed UV-C with UV-A and UV-B. For that, you would need a more sophisticated design that would probably cost more than $5.

SAFETY NOTE: Don’t mess with UV-C light sources unless you have a good idea of what you are doing and are sure that the light is contained, e.g. in a sealed box, maybe with interlocks. Remember that you also rely on DNA, and inadvertently zapping your own DNA can cause all sorts of unpleasantness.