On November 8th, 2020 the Sun exploded. Well, that’s a bit dramatic (it explodes a lot) — but a particularly large sunspot named AR2781 produced a C5-class solar flare which is a medium-sized explosion even for the Sun. Flares range from A, B, C, M, and X with a zero to nine scale in each category (or even higher for giant X flares). So a C5 is just about dead center of the scale. You might not have noticed, but if you lived in Australia or around the Indian Ocean and you were using radio frequencies below 10 MHz, you would have noticed since the flare caused a 20-minute-long radio blackout at those frequencies.

According to NOAA’s Space Weather Prediction Center, the sunspot has the energy to produce M-class flares which are an order of magnitude more powerful. NOAA also has a scale for radio disruptions ranging from R1 (an M1 flare) to R5 (an X20 flare). The sunspot in question is facing Earth for the moment, so any new flares will cause more problems. That led us to ask ourselves: What if there were a major radio disruption?

This happens more often than you might think. In October, AR2775 set off two C flares and while plasma from the flare didn’t hit Earth, UV radiation caused a brief radio outage over South America. The X-ray and UV radiation travel at the same speed as light, so by the time we see a flare, it is too late to do anything about it, even if we could.

The effects are mostly related to the propagation of radio waves via the ionosphere. In the 1700s, who would care? In the mid 20th century, though, lots of things relied on this property of high-frequency radio waves. Today, it might not matter nearly as much.

If you own a shortwave radio, you may have noticed there isn’t as much to listen to broadcast-wise as there was decades ago. Broadcasters that want to reach an international audience use the Internet to do that now unless they are targeting a part of the world where Internet is rare or restricted. Even the AM radio band isn’t the mainstay it used to be. Many people listen to FM (which propagates differently), satellite radio, or they stream audio from the Internet. Sure, that uses radio, but not ionosphere propagation.

Perhaps the biggest commercial users of the radio bands now are transoceanic aviation and ships at sea, but even then, many of those uses are now using satellites and much higher frequencies. Ham radio operators are still there, of course, as are some time and frequency standard stations like WWV. While there were some radio frequency navigation systems like LORAN and Gee, these are nearly all gone in favor of GPS. 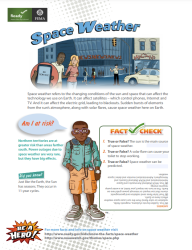 Would a disruption of these services be a big deal? Probably not, although if you are on a plane or at sea, you might get a little tense. Then again, it just depends on how important that radio device is to you and how many alternatives you have.

Then again, truly big events — so-called Carrington events — can affect a lot of electronics directly. The insurance industry thinks it could run up to $2.6 trillion in damages. Worried? Maybe keep an eye on the space weather channel. If you are interested in what the United States government would do if we had another Carrington-level event, they have it all written out. Honestly, though, the plan seems to be, in summary, do better forecasts and develop new technology. FEMA has an info-graphic that asserts that a solar flare could affect your toilet, although it seems like it would take quite a while for that to happen. It is a bit more interesting to read their excellent but unreleased memo on the topic. The maps on page 16 and 17 showing where the power grid is vulnerable to geomagnetic storms is particularly interesting.

38 thoughts on “Solar Flares And Radio Communications — How Precarious Are Our Electronics?”