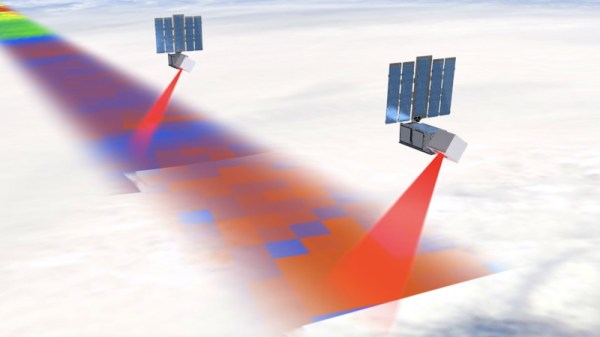 When Astra’s diminutive Rocket 3.3 lifted off from its pad at the Cape Canaveral Space Force Station on June 12th, everything seemed to be going well. In fact, the mission was progressing exactly to plan right up until the end — the booster’s second stage Aether engine appeared to be operating normally until it abruptly shut down roughly a minute ahead of schedule. Unfortunately, orbital mechanics are nothing if not exacting, and an engine burn that ends a minute early might as well never have happened at all.

According to the telemetry values shown on-screen during the live coverage of the launch, the booster’s upper stage topped out at a velocity of 6.573 kilometers per second, well short of the 7.8 km/s required to attain a stable low Earth orbit. While the video feed was cut as soon as it was clear something had gone wrong, the rigid physics of spaceflight means there’s little question about the sequence of events that followed. Without the necessary energy to stay in orbit, the upper stage of the rocket would have been left in a sub-orbital trajectory, eventually reentering the atmosphere and burning up a few thousand kilometers downrange from where it started.

Of course, it’s no secret that spaceflight is difficult. Doubly so for startup that only has a few successful flights under their belt. There’s no doubt that Astra will determine why their engine shutdown early and make whatever changes are necessary to ensure it doesn’t happen again, and if their history is any indication, they’re likely to be flying again in short order. Designed for a Defense Advanced Research Projects Agency (DARPA) competition that sought to spur the development of cheap and small rockets capable of launching payloads on short notice, Astra’s family of rockets have already demonstrated unusually high operational agility.

Astra, and the Rocket 3.3 design, will live to fly again. But what of the payload the booster was due to put into orbit? That’s a bit more complicated. This was the first of three flights that were planned to assemble a constellation of small CubeSats as part of NASA’s TROPICS mission. The space agency has already released a statement saying the mission can still achieve its scientific goals, albeit with reduced coverage, assuming the remaining satellites safely reach orbit. But should one of the next launches fail, both of which are currently scheduled to fly on Astra’s rockets, it seems unlikely the TROPICS program will be able to achieve its primary goal.

So what exactly is TROPICS, and why has NASA pinned its success on the ability for a small and relatively immature launch vehicle to make multiple flights with their hardware onboard? Let’s take a look.

END_OF_DOCUMENT_TOKEN_TO_BE_REPLACED 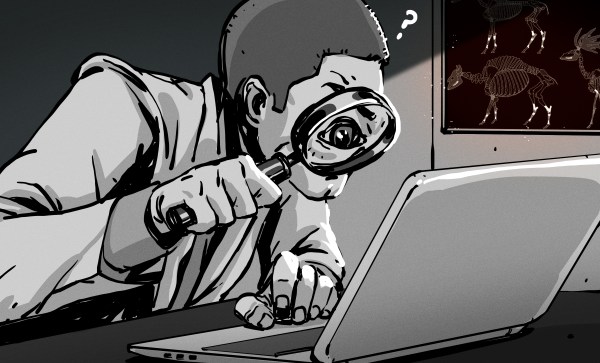 Identifying new species is key to the work of zoologists around the world. It’s an exciting part of research into the natural world, and being the first to discover a new species often grants a scientists naming rights that can create a legacy of one’s work that lasts long into the future.

Traditionally, the work of taxonomy involved capturing and preserving an example of the new species. This is such that it could be classified properly and studied in detail by scientists working now and in the future. However, times are changing, and scientists are beginning to identify new species on the basis of videos and photos instead.

END_OF_DOCUMENT_TOKEN_TO_BE_REPLACED 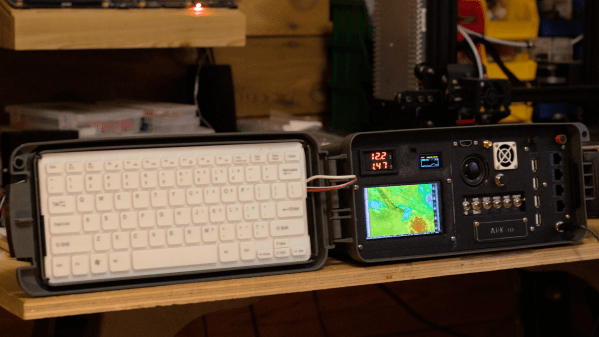 In the cyberdeck world, some designs are meant to evoke a cyberpunk vibe, an aesthetic that’s more lighthearted than serious. Some cyberdecks, though, are a little more serious about hardening their designs against adverse conditions. That’s where something like the ARK-io SurvivalDeck comes into play.

Granted, there does seem to be at least a little lightheartedness at play with the aptly named [techno-recluse]’s design. It’s intended to be an “Apocalypse Repository of Knowledge”, which may be stretching the point a bit. But it does contain an impressive amount of tech —  wide-band software defined radio (SDR) covering HF to UHF, GPS module, a sensor for air pressure, temperature, and humidity, and a Raspberry Pi 3B running Kali Linux. Everything is housed in a waterproof ammo can; a 3D printed bezel holds an LCD touchscreen and a satisfying array of controls, displays and ports. The lid of the ammo can holds a keyboard, which was either custom-made to precisely fit the lid or was an incredibly lucky find.

There’s a lot to like about this build, but our favorite part is the external dipole for receiving NOAA weather satellite imagery. The ability to monitor everything from the ham bands to local public service channels is a nice touch too. And we have no complaints about the aesthetics or build quality either. This reminds us of an earlier cyberdeck with a similar vibe, but with a more civilian flavor.

Thanks to [Kate] for the tip.

END_OF_DOCUMENT_TOKEN_TO_BE_REPLACED 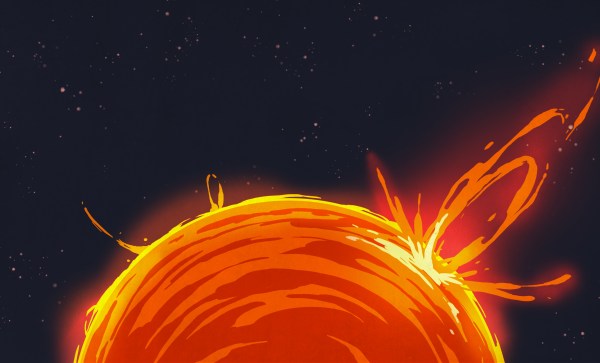 On November 8th, 2020 the Sun exploded. Well, that’s a bit dramatic (it explodes a lot) — but a particularly large sunspot named AR2781 produced a C5-class solar flare which is a medium-sized explosion even for the Sun. Flares range from A, B, C, M, and X with a zero to nine scale in each category (or even higher for giant X flares). So a C5 is just about dead center of the scale. You might not have noticed, but if you lived in Australia or around the Indian Ocean and you were using radio frequencies below 10 MHz, you would have noticed since the flare caused a 20-minute-long radio blackout at those frequencies.

According to NOAA’s Space Weather Prediction Center, the sunspot has the energy to produce M-class flares which are an order of magnitude more powerful. NOAA also has a scale for radio disruptions ranging from R1 (an M1 flare) to R5 (an X20 flare). The sunspot in question is facing Earth for the moment, so any new flares will cause more problems. That led us to ask ourselves: What if there were a major radio disruption?

END_OF_DOCUMENT_TOKEN_TO_BE_REPLACED 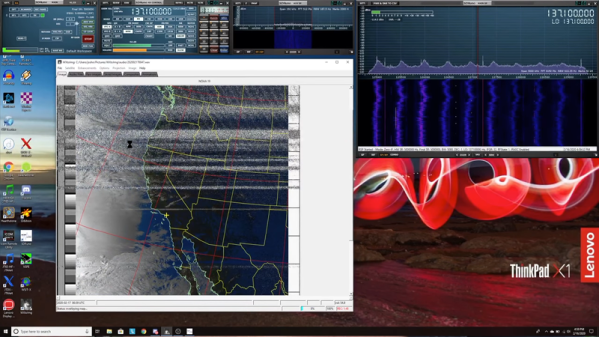 [Josh] has a series called Ham Radio Crash Course and a recent installment covers how you can grab satellite images directly from weather satellites. This used to be more of a production than it is now thanks to software defined radio (SDR). Josh also has another project using a 3D printer to make an antenna suitable for the job. You can see the video below.

The software is the venerable WXtoImg program. This is abandonware, but the community has kept the software available. The program works on Linux, Windows, and Mac. The satellites in question operate around 137 MHz, but that’s easily in the range of even the cheap SDR dongles. [Josh] shows how to use a virtual audio cable on Windows to connect the output of the radio to the input of the WXtoImg program. Under Linux, you can do this with Pulse or Jack very easily without any extra hardware.

There’s some setup and calibration necessary for the software. You’ll also need the current orbital data and the program will tell you when you can find the next satellite passing overhead. Generally speaking you’ll want your antenna outside, which [Josh] solved by taking everything outdoors and having some lunch during the pass. It also takes some time to post-process the data into images and audio.

We know this isn’t new. But we did like [Josh’s] clear and up-to-date guide. We remember watching NOAA 15 as it started to lose its electronic mind.

END_OF_DOCUMENT_TOKEN_TO_BE_REPLACED 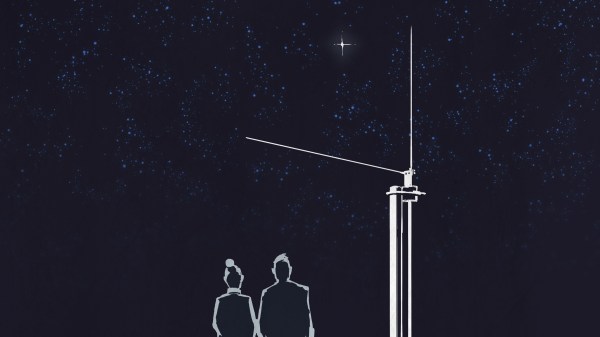 What is this world coming to when a weather satellite that was designed for a two-year mission starts to fail 21 years after launch? I mean, really — where’s the pride these days?

All kidding aside, it seems like NOAA-15, a satellite launched in 1998 to monitor surface temperatures and other meteorologic and climatologic parameters, has recently started showing its age. This is the way of things, and generally the decommissioning of a satellite is of little note to the general public, except possibly when it deorbits in a spectacular but brief display across the sky.

But NOAA-15 and her sister satellites have a keen following among a community of enthusiasts who spend their time teasing signals from them as they whiz overhead, using homemade antennas and cheap SDR receivers. It was these hobbyists who were among the first to notice NOAA-15’s woes, and over the past weeks they’ve been busy alternately lamenting and celebrating as the satellite’s signals come and go. Their on-again, off-again romance with the satellite is worth a look, as is the what exactly is going wrong with this bird in the first place.