Solid-state drives (SSDs) are all the rage these days, and for good reason. But that doesn’t mean the era of the spinning disk is over, as traditional mechanical hard drives still offer a compelling value for mass storage applications where access times aren’t as critical. But the components inside these “slow” mechanical drives are still moving at incredible speeds, which [The Developer Guy] has nicely illustrated with his transparent hard drive. 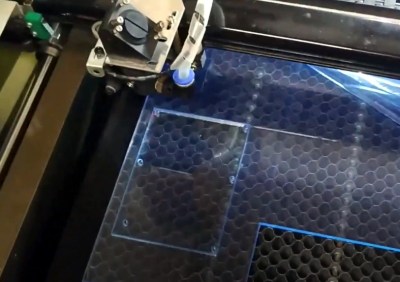 Now unfortunately the technology to produce a fully transparent hard drive doesn’t exist, but laser cutting a new top plate out of acrylic is certainly within the means of the average hacker. The process is pretty straightforward: cut out a piece of clear plastic in the same shape and size as the drive’s original lid, put the appropriate mounting holes in it, and find some longer screws to accommodate the increased thickness.

Because this is just for a demonstration, [The Developer Guy] doesn’t need to worry too much about dust or debris getting on the platters; but we should note that performing this kind of modification on a drive you intend on actually using would be a bad idea unless you’ve got a cleanroom to work in.

In the videos below [The Developer Guy] records the drive while it’s in use, and at one point puts a microscope on top of the plastic to get a close-up view of the read/write head twitching back and forth. We particularly liked the time-lapse of the drive being formatted, as you can see the arm smoothly moving towards the center of the drive. Unfortunately the movement of the platters themselves is very difficult to perceive given their remarkably uniform surface, but make no mistake, they’re spinning at several thousand RPM.

Have an old mechanical drive of your own that you’re not sure what to do with? We’ve seen them turned into POV clocks, impromptu rotary encoders, and even surprisingly powerful blower fans.

29 thoughts on “Transparent Hard Drive Gives Peek At The Platters”