END_OF_DOCUMENT_TOKEN_TO_BE_REPLACED

Acrylic sheets are relatively inexpensive, pretty, and can be heat-shaped very effectively. There are blades and tools made specifically for cutting, heating, and bending acrylic but [Marija] shows that even without them acrylic can be cut and bent with a bit of care and patience. 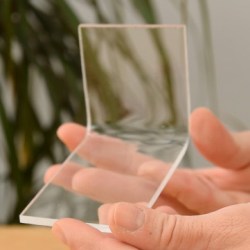 Acrylic sheets are brittle and crack easily, but a hacksaw is a good way to cut it by hand. After cutting, [Marija] uses a small portable gas stove at its lowest setting to provide gentle heat until the acrylic becomes soft, then it can be formed into different shapes using common shop and household items. It’s a process that requires patience and practice, so she shares some useful tips:

[Marija] used this method of heating and bending acrylic to complete an earlier lamp project of hers that we featured in the past. Acrylic might laser-cut beautifully, and there may be inexpensive tools for heating and bending it, but it’s always nice to have some tried and true techniques that don’t require anything special.

END_OF_DOCUMENT_TOKEN_TO_BE_REPLACED

Acrylic is a popular material. It’s easy to find, attractive, and available in all manner of colors, thicknesses, and grades. Being a thermoplastic, it’s also simple to apply heat and form it in various different ways. If you’re wanting to build parts out of sheet acrylic, you might find a purpose-built bender useful. [DIY Perspective] built just such a tool to get the job done.

Plywood is used as the base of the tool, and several off-the-shelf hinges are used to make the folding apparatus. Stops are cut out of scrap wood to allow the bender to accurately recreate angles of 45, 90, and 135 degrees. Heat is supplied via a nichrome wire, powered by a laptop power supply and a PWM controller. This allows the temperature of the wire to be controlled, to avoid melting or otherwise damaging the acrylic being bent.

If you find yourself routinely working with acrylic, you might find this tool useful to have around the workshop. Vacuum forming may also be relevant to your interests. Video after the break.

END_OF_DOCUMENT_TOKEN_TO_BE_REPLACED 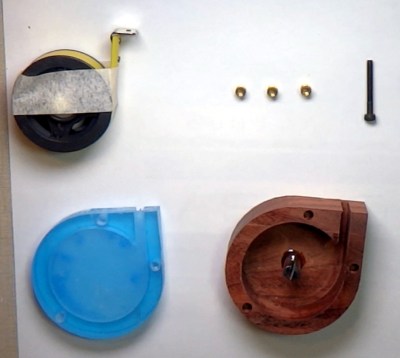 END_OF_DOCUMENT_TOKEN_TO_BE_REPLACED

If anything ends up on the beds of hobbyist-grade laser cutters more often than birch plywood, it’s probably sheets of acrylic. There’s something strangely satisfying about watching a laser beam trace over a sheet of the crystal-clear stuff, vaporizing a hairs-breadth line while it goes, and (hopefully) leaving a flame-polished cut in its wake.

Acrylic, more properly known as poly(methyl methacrylate) or PMMA, is a wonder material that helped win a war before being developed for peacetime use. It has some interesting chemistry and properties that position it well for use in the home shop as everything from simple enclosures to laser-cut parts like gears and sprockets.