A few years ago [Mechatrommer] got one of the low-cost Aneng Q1 multimeters and has converted it into a bench top meter. He first tried and failed to do an LCD modification and set it aside. It remained in a storage box until he needed another meter to repair his rubidium frequency standard. Finding that off-the-shelf bench multimeters were literally off-the-shelf — they were too deep for his bench — he decided to take matters into his own hands. 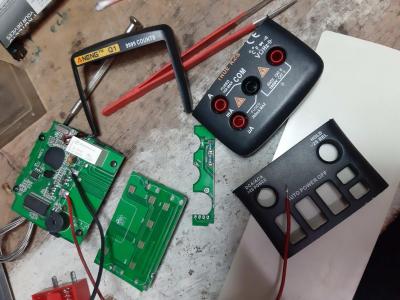 He dug out the dismantled an Aneng Q1 and undertook a more drastic modification than before, slicing the multimeter into three pieces and mounting each piece in a new enclosure. The power-draining back-lit display of the Q1, problematic in a battery-powered handheld meter, isn’t an issue in a bench top design. [Mechatrommer] replaced the battery pack with a mains powered supply. Next he reconnected all the signals which had been interrupted by the bandsaw, and now the meter lives again.

The resulting meter is pleasing enough (ignore the sideways input jacks) and looks like a typical piece of home-brew test gear. The enclosure has a lot of empty space, which he uses to stow test leads and sandwiches (we saw a similar storage compartment in [Dave Jones]’s recent teardown of a portable Fluke 37 multimeter). Kudos to [Mechatrommer] for coming up with this unusual conversion project.

We’ve written about the differences between these low-cost and more professional multimeters before if you want to learn more.

14 thoughts on “Handheld Multimeter Converted For Bench Top Use”