Welcome to the Holocene

The current geological era is called the Cenozoic (also known as the Age of Mammals), which encompasses 66 million years, divided into three periods:

The Quaternary forms roughly the period in which recognizable humans existed and consists of two epochs:

Some have proposed we recognize a new geological epoch called the Anthropocene (‘human epoch’), which would be defined as the epoch in which human activity first began to leave significant traces in the geological record. Although still the subject of intense debate, the search is on to find a so-called ‘golden spike’ in the geological record that may consist out of radionucleotides, heavy metals, fly ash and similar finds which would be indicative of the rise of human activity during the early 20th century.

If the Anthropocene becomes the new current epoch, its beginning would likely be placed around the 1950s. Yet the Holocene and to some extent the Pleistocene are probably our best indicators for what counts as the current ‘normal’, as far as Earth’s current climate and global temperatures goes, and what would be the result of so-called ‘forcings’. These are influences that force the global temperature to be higher or lower than it would otherwise have been, ranging from volcanic eruptions, meteor impacts, and solar activity, to human activities.

As explained by the National Centers for Environmental Information (formerly NCDC) at the National Oceanic and Atmospheric Administration (NOAA), the pattern of forcings for the past 1,000 years is quite clear. When comparing the influence of solar activity (through radioactive 14C and 10Be isotopes in ice cores and tree rings) as well as that from volcanic eruptions (via sulfate (SO42-) layers) there is a strong correlation within simulations, up until the 20th century.

This is even more clear when one looks at the followed comparison of global temperatures based on nearly a dozen published studies:

While the preceding graphs make it both rather obvious that the global temperature rise observed during the 20th and current 21st century are not being forced by increased solar activity or similar positive influence, it is pertinent to put this dramatic rise in context using Earth’s geologic temperature record for the past 500 million years:

Much like for the past thousand years, these temperatures were reconstructed through climate proxies: geological and other markers which have in some way recorded characteristics from which meteorological measurements (e.g. temperature) can be deduced. Each of these proxies have a limit to how far back in time they can take us, either through the gradual (radioactive) decay of the marker, or because of how much of the proxy exists (e.g. thickness and age of an ice sheet).

Of these proxies, ice cores are probably the most well-known. These can take us back to approximately 800,000 years and provide us with air samples from a specific period from trapped air bubbles. In addition, impurities such as sand and ash can provide clues to atmospheric events — our own Jenny List wrote an article about how lead from human smelting activities in the 13th century was found in alpine glaciers. This allows us to construct graphs such  as the following using Vostok Station ice cores:

This graph covers the past 420,000 years, with CO2 levels staying well below 300 ppm (parts per million). Atmospheric CO2 measurements today (as of June 2021) are well over 410 ppm. In the absence of other forcing events, this might conceivably explain the rapid global temperature rise. CO2 levels along with similar gases such as methane (CH4) are an obvious cause through radiative forcing. This effect is commonly referred to as the ‘greenhouse effect’.

While the Earth’s atmosphere serves to retain warmth in this fashion to maintain the biosphere and the fragile life in it, by changing the magnitude of the radiative forcing, this can result in dramatic increases or drops in global temperatures. This saw for example the Cambrian (541 Mya – 485.4 Mya) with atmospheric CO2 levels of about 4,500 ppm and a global temperature of 7 °C higher than the pre-industrial temperatures of the 19th century.

Another such maximum was the Paleocene-Eocene Thermal Maximum (PETM) which saw a significant global temperature increase of 5–8 °C around 55.5 Mya. This was linked to volcanism and significant changes in Earth’s carbon cycle. As a result of these changes there were mass-extinctions of many species.

Clearly, the Earth’s climate has been much warmer and featured much more atmospheric CO2 than today, so exactly what is the matter with today’s changes, and the target of staying below a global temperature increase of 3°C? The answer here can be summarized succinctly by pointing at these mass-extinctions found in the geological record and the realization that humans have evolved only over the past 300,000 years, give or take a millennium.

One of the hallmarks of evolution is that a species evolves to fit a certain environment. As the Earth’s climate changes between extremes, certain species will find that they are poorly equipped to handle these changes. This can involve a drop or rise in temperatures, changing oxygen levels (what likely drove Meganeura dragonflies to extinction) and the destruction of the habitat through events like desertification.

While one may scoff at rising temperatures, and consider the amazing technologies we have such as air conditioning, it bears to keep in mind that a body temperature of 40°C (104°F) is considered a medical emergency, and human thermoregulation may already fail when exposed to a wet-bulb temperature of 35°C (95°F) over 6 hours, resulting in a fatal case of hyperthermia.

Steven C. Sherwood et al. found that due to heat stress, many parts of Earth’s surface may become uninhabitable and even lethal to humans due to this heat stress. Along with humans, other animals would also be exposed to these temperatures, as well as all plant life. While we can put ourselves in air conditioned rooms and vehicles, we cannot do the same with livestock, crops and entire ecosystems. Eventually, after only a few hundred years, this could cause the worst extinction event since the PETM.

End of the Anthropocene

One might wonder what could be the golden spike that would indicate the end of the Anthropocene (that hotly debated ‘human epoch’ mentioned earlier) and the beginning of a new epoch. The pessimistic view there is that humanity may not be around to witness this change, and thus that it may not matter. For the optimistic view there is the notion that it could be the point where humanity found a way to avoid creating forcings that will ultimately end up destroying the habitat and climate on which it relies to survive.

Here the reduction of pollution and especially the release of gases such as CO2 and CH4 into the atmosphere is generally considered the most effective way to prevent a worst-case scenario as described by Steven C. Sherwood et al. Yet this approach is also proving to be exceedingly difficult, as evidenced by humanity’s continued use of fossil fuels, considered to be the primary source of these carbon-based gases: 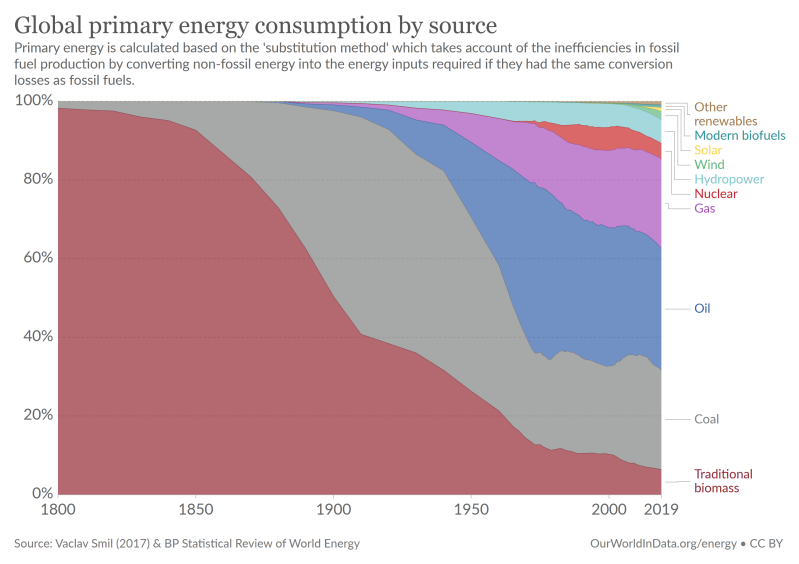 Clearly the overwhelming majority of the energy that powers human societies today comes from fossil fuel sources, after these took over from traditional biomass (i.e. burning wood and similar). Each of these sources come with its own ‘carbon budget’, as we can see when we look at the lifetime carbon emissions for these sources when used in electricity production: 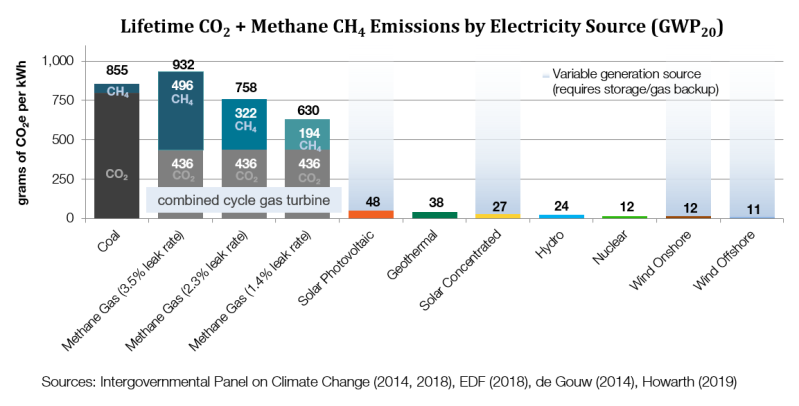 If we wish to rapidly reduce the amount of CO2 and CH4 in the atmosphere, we should be using more of the sources on the right-hand side, and none of the sources on the left. As much as we as a species are loathe to admit it, at this point in time, located on the very edge of the geologic climate record, humanity is the primary forcing factor in Earth’s climate.

While changing the climate is a pretty unique property not seen since Proterozoic bacteria wiped out much of Earth’s life through the production of toxic oxygen, it also comes with a certain amount of responsibility. Here we have an excellent opportunity to prove the notion that humans are in fact the pinnacle of intelligent life.