Still don’t have anything to wear to that Halloween party this weekend? Or worse, your kid hasn’t decided on a costume that you both can agree on? Well, look no further than [Natasha Dzurny]’s Sally Servo the Really Robotic Robot Costume and accompanying multi-part build guide. You might want to start by raiding that recycle bin for cardboard, because you’re going to need a lot of it. 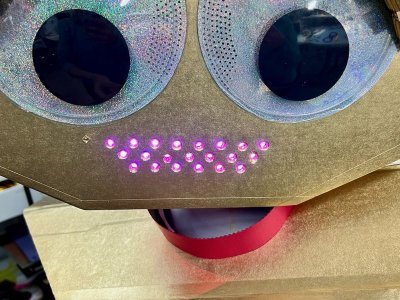 What you won’t need a lot of is hard-to-source parts, at least if you build it the [Natasha] and Brown Dog Gadgets way. Even so, there are a ton of cool moving and blinking bits and bobs to be made with servos, LEDs, and RGB LEDs connected up to something kid-friendly like the Micro:bit and the Brown Dog Gadgets Bit Board — that’s a base for the :bit that lets users connect components via LEGO and conductive tape.

Between Sally’s robotic googly eyes and her light-up belt, there are plenty of ideas here to steal and make your own, and each one is packaged in a great-looking guide complete with paper printing templates.

Our favorite part has to be the infinity mirror heart, which appears to be beating thanks to clever programming. That, and the costume details, like the waist-area wires running between the upper and lower pieces.

Is the party at your house? There’s probably still enough time to put together a projector-based stomping game for the driveway.