To measure wind speed and direction, most people turn the traditional cup anemometer and wind vane. Another less-known method is to use an array of ultrasonic transducers, which doesn’t need any moving parts. [Andy] demonstrates building an ultrasonic anemometer using a cheap after-market parking distance sensor kit and an Arduino. Demo video after the break.

Aside from the price, these kits have the added advantage of including waterproof ultrasonic transducers, perfect for an outdoor weather station, and all the required circuitry to drive them. Some circuit surgery is required to remove the existing 8-pin microcontroller and wire in an Arduino Pro Micro and a few passives to take control of the pulse outputs and processing of the received signal to calculate direction and velocity. The ultrasonic transducers are mounted in a circular baseplate pointing up to an “echo plate” mounted on a carbon fiber rod. [Andy]’s latest version also added an ESP8266 Wi-Fi module for connectivity.

One of the challenges of DIY environmental sensors is calibrating them to output reliable absolute values, and this is especially the case for wind speed. You need another anemometer that is known to be accurate or a wind source of a known velocity. A while back we covered [Jianjia Ma]’s ultrasonic anemometer build, where he mounted it on top of his car and went for his drive, but still couldn’t quite get consistent results.

While the lack of moving parts are nice, ultrasonic anemometers are significantly more complex on the software and electronics side, and a DIY cup and vane anemometer is still a viable alternative.

END_OF_DOCUMENT_TOKEN_TO_BE_REPLACED 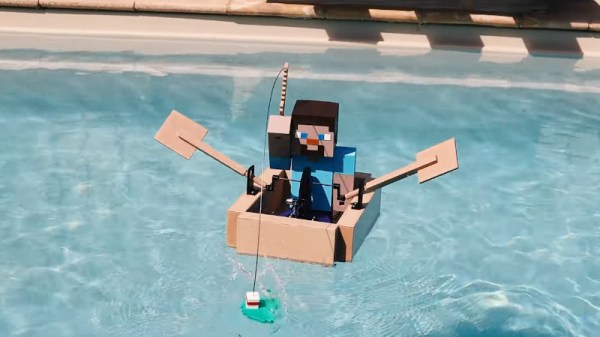 Looking to recreate those relaxing Minecraft fishing sessions in real life, [electrosync] recently set out to 3D print himself a blocky remote controlled boat, complete with a similarly cubic occupant to ride in it. Each element of the build, from the oars to the bobber on the end of the fishing line, has been designed to look as faithful to the source material as possible. In fact, the whole thing is so accurate to the game that it’s almost surreal to see it rowing around the pool.

That said, some of the resemblance is only skin deep. For example the rowing action, though it appears to be properly synchronized to the boat’s movement through the water, is completely for show. A standard propeller and rudder arrangement under the boat provide propulsion and directional control, and [electrosync] notes its actually powerful enough to push the boat very near to its scale top speed from the game, despite the exceptionally poor hydrodynamics of what’s essentially just a rectangle.

Speaking of which, [electrosync] even went through the trouble of printing the hull in wood-fill PLA and coating it in polyester resin to make sure it was watertight. Granted he could have just made the boat out of wood in the first place, saving himself the nearly 60 hours it took to print the hull parts, but that would have been cheating.

Beyond the servos and motors that move the boat and the oars, [electrosync] had to give his 3D printed fisherman a considerable amount of dexterity. Servos embedded into the 3D printed parts allow “Steve” to rotate at the hips and raise and lower his arm. With a fishing pole slipped into a hole printed into the hand, he’s able to cast out his magnetic bobber and see whats biting.

We’ve actually seen quite a number of projects that allow virtual objects inside Minecraft to interact with the real world, but comparatively few efforts to recreate objects from the game’s blocky universe, so the change of pace is nice.

END_OF_DOCUMENT_TOKEN_TO_BE_REPLACED 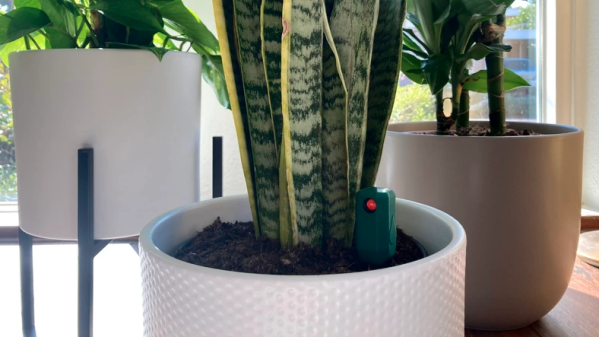 Soil sensors are handy things, but while sensing moisture is what they do, how they handle that data is what makes them useful. Ensuring usefulness is what led [Maakbaas] to design and create an ESP32-based soil moisture sensor with wireless connectivity, deep sleep, data logging, and the ability to indicate that the host plant needs watering both visually, and with a push notification to a mobile phone.

The visual notification part is pretty nifty, because [Maakbaas] uses a small flip-dot indicator made by Alfa-Zeta. This electromechanical indicator works by using two small coils to flip a colored disk between red or green. It uses no power when idle, which is a useful feature for a device that spends most of its time in a power-saving deep sleep. When all is well the indicator is green, but when the plant needs water, the indicator flips to red.

The sensor itself wakes itself up once per hour to take a sensor measurement, which it then stores in a local buffer for uploading to a database every 24 measurements. This reduces the number of times the device needs to power up and connect via WiFi, but if the sensor ever determines that the plant requires water, that gets handled immediately.

The sensor looks great, and a 3D-printed enclosure helps keep it clean while giving the device a bit of personality. Interested in rolling your own sensor? The project also has a page on Hackaday.io and we’ve previously covered in-depth details about how these devices work. Whether you are designing your own solution or using existing hardware, just remember to stay away from cheap probes that aren’t worth their weight in potting soil. 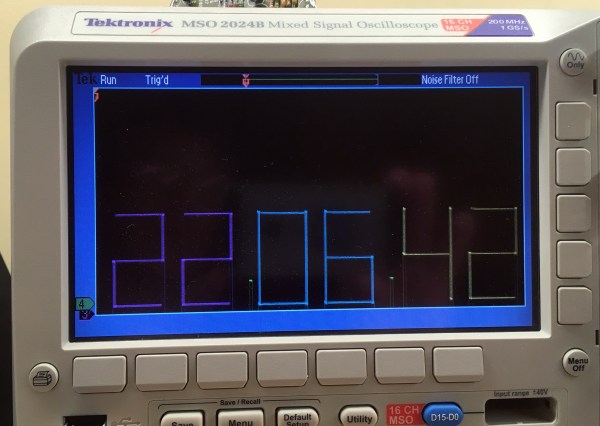 Ordinarily, when we hear the words “clock” and “oscilloscope” in the same sentence we conjure images of measuring a stable, repeating square wave that acts as the heartbeat of a system. Of course, that’s not the only meaning– there’s a much more fun and less useful one: using an oscilloscope to display the time.

That’s what [Wolfgang Friedrich] set out to do when he cobbled some protoboard, probes, and an FPGA into the Multi Color Oscilloscope Clock. Each digit on the clock is treated like a seven-segment display, made up of three horizontal bars and four vertical bars. The horizontal bars are generated by constant voltage at different levels, and the vertical bars are generated by quickly switching between two voltages. [Wolfgang] decided to use an R-2R resistor ladder DAC to create the appropriate analog signals from the FPGA’s digital outputs. For bonus points, each set of digits (hours, minutes, and seconds) are output concurrently through separate channels, so they can be displayed in different colors on the screen of his four-channel scope (the fourth channel is used for the points between numbers).

Misusing oscilloscopes in the name of fun has become a time-honored tradition– from Tennis for Two back in 1958 (which later became the beloved Pong) to the plethora of analog o-scope clocks we’ve seen, it’s clear that hackers just can’t get enough of the unique vector display style that a scope can provide. We love [Wolfgang]’s idea of using the scope’s channels to create a multi-color display, and we’re left wondering what kind of wacky waveforms we’ll be seeing next. 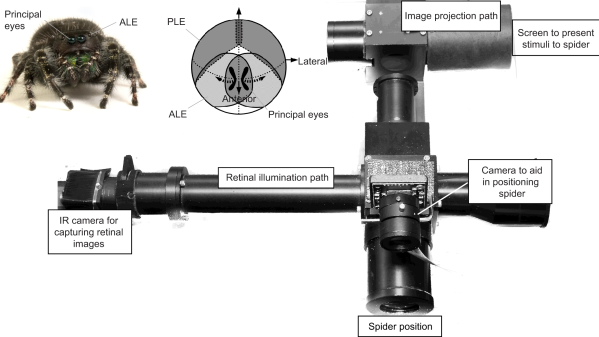 The eyes are windows into the mind, and this research into what jumping spiders look at and why required a clever device that performs eye tracking, but for jumping spiders. The eyesight of these fascinating creatures in some ways has a lot in common with humans. We both perceive a wide-angle region of lower visual fidelity, but are capable of directing our attention to areas of interest within that to see greater detail. Researchers have been able to perform eye-tracking on jumping spiders, literally showing exactly where they are looking in real-time, with the help of a custom device that works a little bit like a miniature movie theatre.

To do this, researchers had to get clever. The unblinking lenses of a spider’s two front-facing primary eyes do not move. Instead, to look at different things, the cone-shaped inside of the eye is shifted around by muscles. This effectively pulls the retina around to point towards different areas of interest. Spiders, whose primary eyes have boomerang-shaped retinas, have an X-shaped region of higher-resolution vision that the spider directs as needed.

So how does the spider eye tracker work? The spider perches on a tiny foam ball and is attached — the help of a harmless and temporary adhesive based on beeswax — to a small bristle. In this way, the spider is held stably in front of a video screen without otherwise being restrained. The spider is shown home movies while an IR camera picks up the reflection of IR off the retinas inside the spider’s two primary eyes. By superimposing the IR reflection onto the displayed video, it becomes possible to literally see exactly where the spider is looking at any given moment. This is similar in some ways to how eye tracking is done for humans, which also uses IR, but watches the position of the pupil.

In the short video embedded below, if you look closely you can see the two retinas make an X-shape of a faintly lighter color than the rest of the background. Watch the spider find and focus on the silhouette of a tasty cricket, but when a dark oval appears and grows larger (as it would look if it were getting closer) the spider’s gaze quickly snaps over to the potential threat.

Feel a need to know more about jumping spiders? This eye-tracking research was featured as part of a larger Science News article highlighting the deep sensory spectrum these fascinating creatures inhabit, most of which is completely inaccessible to humans.

END_OF_DOCUMENT_TOKEN_TO_BE_REPLACED

We’ve already unveiled multiple keynote speakers and a slate of fascinating presenters that will be showing off everything from reverse engineering vintage calculators to taking those first tentative steps on your CAD journey for this year’s Remoticon. You’d be forgiven for thinking that’s everything you’ll see at the conference, but there’s still plenty to announce before the two-day virtual event kicks off on November 19th. Normally we’d be promising to make sure you get your money’s worth, but since tickets are completely free, we’re shooting a bit higher than that.

We were blown away by the number of fantastic talk proposals we received during this year’s extended call. Let’s take a look at the next four presenters who will be joining us for the 2021 Hackaday Remoticon on November 19th through the 20th.

END_OF_DOCUMENT_TOKEN_TO_BE_REPLACED 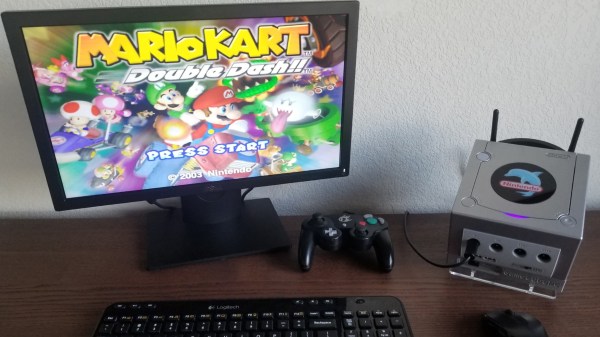 If reading Hackaday teaches us anything, it’s that there is a subset of hackers who take things like emulator builds a step farther than most. [RetroModder] is very clearly one such hacker. Enter the GamecubePC, which you can read about on Hackaday.io. The GamecubePC is a multi-year project that aims to stuff an entire Windows 10 PC into a GameCube shell while still being able to play Wii and GameCube titles at native resolution and performance.

Although it only takes a spare computer and the Dolphin emulator to make a GameCube and Wii emulator, great attention has been paid to keeping the GameCube at the forefront. Contributing to the illusion is the preservation of the original GameCube power switch and reset buttons by way of custom PCB’s that interface the parts to the mSTX motherboard.

The bottom of the GameCube shell is replaced with a 3D printed base that mounts the motherboard while smartly giving access to the motherboard’s front panel. The minuscule motherboard sports an Intel Core™ i5-7600 with 8GB memory, and SSD storage. Topping off the experience are four functional controller ports that can be switched to be used with the emulator or with PC games too. Surely the GamecubePC will be the subject of many double takes!

Custom game builds are no stranger to Hackaday, and you might appreciate this portable Wii that can play Wii and GameCube games or this GameCube controller hacked into a Joycon for the Nintendo Switch.