We got a tip this week, and the tipster’s comments were along the lines of “this doesn’t look like it’s a finished work yet, but I think it’s pretty cool anyway”. And that was exactly right. The work in question is basically attaching a simple webcam to a CNC router and then having at it with OpenCV, and [vector76]’s application was cutting out freeform hand-drawn curves from wood. To amuse his daughter. 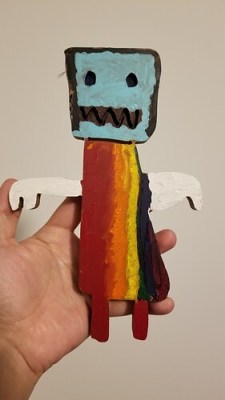 But there’s no apology necessary for presenting a work in progress. Unfinished hacks are awesome! They leave room for further improvement and interpretation. They are like an unfinished story, inviting the hacker to dream up their own end. At least that’s how this one worked on me.

My mind went racing — adding smart and extensible computer vision to a CNC router enables not only line tracing, but maybe smarter edge finding, broken tool detection, and who knows what else. With the software end so flexible these days, and the additional hardware demands so minimal, it’s an invitation. It’s like Pavlov ringing that bell, and I’m the dog-hacker. Or something.

So remember this when you get half done with a project, get to a workable first-stage demo, but you haven’t chased down each and every possibility. Leaving something up to other hackers’ imagination can be just as powerful. Your proof of concept doesn’t have to be the mother of all demos — sometimes just a working mouse will suffice.