You might not think that keeping a boat hull smooth in the water has anything in common with keeping a scalpel clean for surgery, but there it does: in both cases you’re trying to prevent nature — barnacles or biofilm — from growing on a surface. Science has looked to nature, and found that the micro-patterning formed by the scales of certain sharks or the leaves of lotus plants demonstrate a highly elegant way to prevent biofouling that we can copy.

In the case of marine growth attaching to and growing on a ship’s hull, the main issue is that of increased drag. This increases fuel usage and lowers overall efficiency of the vessel, requiring regular cleaning to remove this biofouling. In the context of a hospital, this layer of growth becomes even more crucial. Each year, a large number of hospital patients suffer infections, despite the use of single-use catheters and sterile packaging. 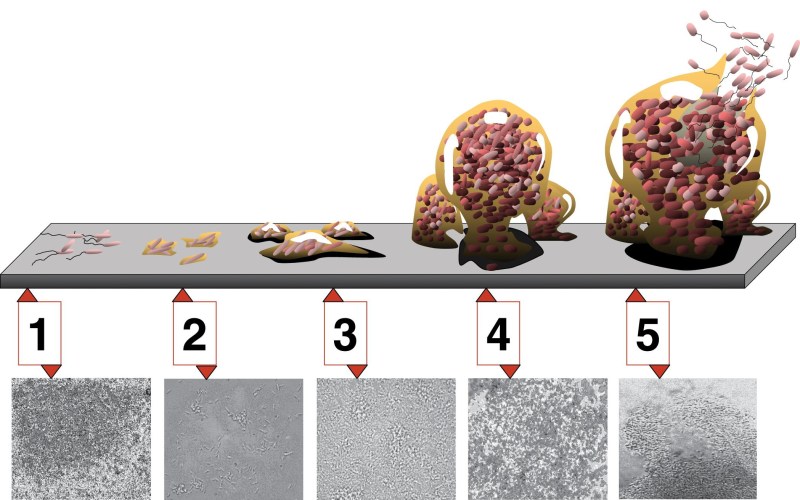 The formation of biofilms dates back to the earliest days of prokaryotic life, as evidenced by fossil evidence in the form of stromatolites. At its core these biofilms appear to be a defensive mechanism that prokaryotic species have initially evolved to cope with harsh environments, while allowing for the formation of flourishing prokaryotic colonies. These colonies can also enable the growth of more complex lifeforms.

Over time, eukaryotic lifeforms would adopt a similar strategy, where after the initial attachment to a surface an extracellular matrix would be created. These biological glues and structures provide the organisms protection against desiccation and predation, as well as other potentially harmful influences.

In a marine environment, these biofilms provide multicellular lifeforms with not only a surface to attach themselves too, but also an accompanying ecosystem. In the case of barnacles, for example, the presence and type of biofilm is paramount in the selection of a specific attachment site when a young barnacle cyprid transitions to its immobile adult state. Similar patterns are observed with other marine species, the outcome of which is a thriving, if undesired, ecosystem on a ship’s hull.

Since the formation of a biofilm requires only some traces of moisture in the presence of bacteria and kin, this makes it likely that during the manufacturing or usage of medical equipment a surface becomes contaminated with a biofilm. Biofilms allow bacteria and other pathogens to survive for extended periods of time on surfaces, so lapses in hygiene form significant risk vectors.

The exact harm of such a biofilm depends on the exact bacteria and other occupants that are inside it, as well as the location of this biofilm. When MRSA bacteria find their way to an intubation or IV tube, this can provide these pathogens with a direct route into a patient’s body, forming biofilms throughout the tubing inside. Once inside the body, they will then proceed to form biofilms, as part of their protective strategies against threats like the patient’s immune system, and antibiotics.

The optimal strategy is thus to prevent these biofilms from forming in the first place, ideally by preventing the initial surface colonization .

You Shall Not Attach

An interesting aspect about evolution is that it seeks to solve many of the same problems which we seek to solve today. For marine animals, having biofilms and other growths on their skin is obviously problematic, as for them it means an increase in drag, just as it does for a ship. This means that the animal will be expending more energy when swimming, in addition to the possibility of skin and other diseases developing due to the proximity of so many bacteria.

Many marine animals rub against rocks, have symbiotic relationships with skin-cleaning fish species, or employ the same skin shedding and replacement process which we land-based species employ. The most interesting approach, however, involves micro patterning that make the initial colonization step part of forming a biofilm essentially impossible.

While scales are very common among marine and other animals, the scales of sharks and rays are unique in their microscopic patterns. In experimental testing show a distinct lack of biofilm formation. This is one of the antifouling methods described by Damodaran et al. (2016) in Biomaterials Research. It summarizes the following approaches:

In terms of what we can copy from nature, the biological molecules and surface modification approaches face high costs, limited lifespan, and limited applicability in terms of which types of bacteria they affect. Toxicity concerns face hydrophobic polymers.

That leaves micropatterning. Rather than a substance that has to be synthesized and regularly applied, these micropatterns can be etched into a surface, with the duration of the effect depending on the durability of the material the pattern was etched into. It’s also possible to use self-assembling patterns, for instance in paints with nanoparticles.

For the boat hull application, the placoid scales of sharks are particularly interesting. They seem to not only prevent bacteria from attaching, but also reduce drag by disrupting the laminar flow near the skin. It’s likely that this drag reduction was a relevant evolutionary factor in the development of these dermal denticles, and it also provides an interesting aspect regarding this type of antifouling — the micropatterns stand to reduce drag of a ship’s hull over and above a ‘clean’ hull.

As with many of such antifouling techniques, the main issues are making it scale to economically feasible levels and making it last. At this point in time the lotus effect is most commonly used, as its regularly repeating pattern lends itself well to use in everything from roof tiles and fabrics to paints. The application of self-cleaning surfaces in outdoor settings is self-evident, as this prevents the build-up of algae and lichen, and also resists things like graffiti.

Shark skin-like patterning is somewhat more complicated, as it involves a more involved pattern that doesn’t lend itself as easily to self-assembly. Probably the most well-known commercialized version of this technology is found in the Sharklet material sold by Sharklet Technologies and their patented micropattern. They target mostly hospitals and similar settings for their product, and a collection of studies also show their effectiveness in the context of preventing foreign body reactions with neural implants.

One thing that ship hulls and medical tubing cannot yet do is to grow dermal denticles the way shark skin can. The shark is refreshing its skin surface continuously. It’s likely that a combination of approaches will remain necessary to fight off biofouling, although we will very likely see micropatterning being employed more commonly in the future for a cleaner and safer world that is less of a drag.