If you’ve ever done maintenance or repair work on your bicycle, you’ll know that positioning a bike in your workshop isn’t trivial. You can use your bike’s kickstand, or lean it against a wall, but then you can’t work on the wheels. You can place it upside-down, but then the shifters and brake levers are hard to reach. You can hang it from the ceiling, but then you first need to install hooks and cables in hard-to-reach places. Ideally you’d want to have one of those standing clamp systems that the pros use, but their price is typically beyond a hobbyist’s budget.

Or at least, that’s how it used to be. As [Dane Kouttron] discovered, a simple wall-mounted bike clamp can be had for as little as $35 on eBay, and can easily be converted into a smart mobile repair stand. [Dane] fashioned an adjustable stand from some steel pipes he had lying around, and 3D-printed an adapter bracket to mount the bike clamp on it. This worked fine, but why stop at a simple clamp when you can expand it with, say, an integrated scale to weigh your bikes while you work on them? 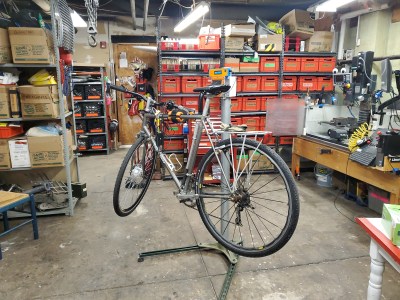 [Dane] thought this a useful addition and went searching for load cells. After finding a suitable model he designed a new bracket that could accurately translate the downward force exerted by the clamp into a compressive force on the load cell: a few blocks of aluminium and a hinge did the trick nicely. He then connected the load cell to an HX711 strain gauge amplifier, whose output was digitized by an Arduino and displayed on an LCD. Finally, he made a sleek 3D-printed enclosure for the whole system that neatly fit on top of the bike clamp.

The resulting system is sturdy enough to hold even a fully loaded electric bike but flexible enough to position it in various orientations. If, like us, you now realized you also need to have this in your workshop, then you can simply download the STL files and the Arduino sketch and build your own. If you’re trying to solve the inverse problem of mounting your workshop onto your bike, there’s solutions for that too.