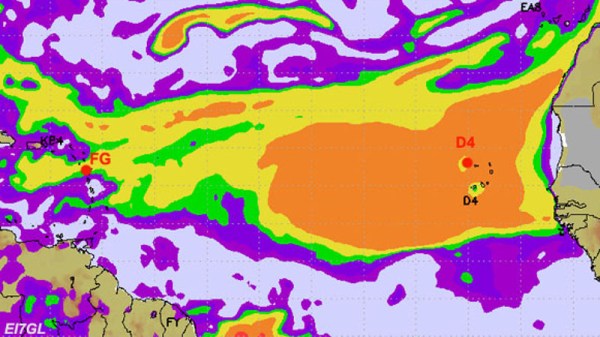 Amateur radio is a pursuit with many facets, some of which hold more attention than others for the hacker. Though there have been radio amateurs for a century it still has boundaries that are being tested, and sometimes they come in surprising places.

A recent first involved something you might consider a done deal, a transatlantic radio contact. On June 16th, for the first time ever a contact was made between the operators [D41CV] and [FG8OJ] at 3867 km across the Atlantic ocean from the Cape Verde Islands to Guadeloupe, on the 2 metre (144 MHz) band. If this means little to you it’s worth explaining that the 2 m band is a VHF band, with a range normally similar to that you’d expect from an FM broadcast station. Nobody has ever done this before, so it’s a significantly big deal.

Before you dismiss this as merely some radio amateur chasing grid squares and thus not particularly impressive, it’s worth talking about both the radio mode used and the unusual atmospheric conditions that were carefully sought for the achievement. The attempt was made to coincide with a prediction of transatlantic tropospheric ducting, and the mode employed was [Joe Taylor K1JT]’s FT8. This is a digital mode designed especially for weak-signal and long-distance work. It is theorised that the propagation was so-called surface ducting, in which the signal travels and is reflected between the surface of the sea and a relatively low-level reflective layer of atmosphere. The contact really pushed the limit of what is possible with radio, and while you wouldn’t use it for a voice conversation, proves that there are new tricks in an old hobby for the hardcore experimenter.

We’ve talked about [K1JT] modes crossing the Atlantic before, but of course not at such a high frequency.