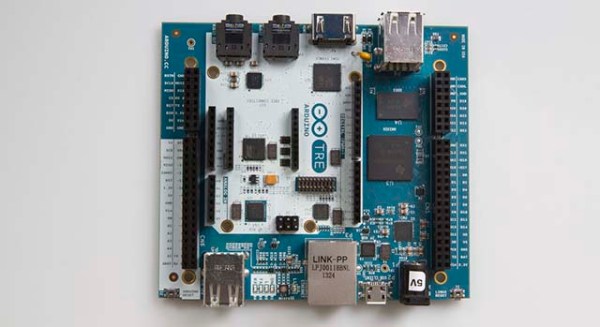 Although yesterday saw the announcement of an x86-based Arduino powered by an Intel chip. This may have not been the big story to come from [Massimo] at Maker Faire Rome. Announced along with the x86 Arduino Galileo was the Arduino TRE, a collaboration between Arduino and the BeagleBoard foundation.

The TRE is really two Arduinos in one: in the center is basically an Arduino Leonardo with the standard Arduino headers and an ATmega32u4. Elsewhere on the board is a TI Sitara ARM Cortex A-8 processor running at 1GHz with 512 MB of RAM, 10/100 Ethernet, HDMI out, USB host and device ports, and a bunch of connectors intended for an LCD and a ZigBee.

There is, of course, the obvious comparison between the TRE and Raspberry Pi. Hardware-wise, the TRE is very close to the BeagleBone Black, a bit more powerful than the Raspberry Pi, and able to do some very cool stuff (i.e. OpenCV) the Pi just can’t handle.

There is – I think – no official price for the Arduino TRE quite yet. It will be available in spring, 2014, though. You can check out all the press release photos in the gallery below.