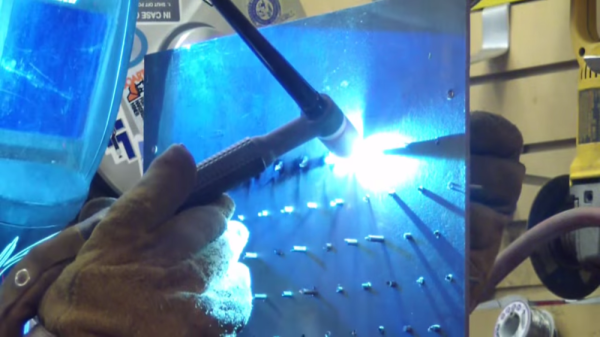 [SuperUnknown] aka [AvE], one of our favorite Canadian hackers is back at it with DRINKO, an adult beverage themed take on the classic PLINKO game from The Price Is Right. He’s built the game as a mancave warming gift for a friend. This isn’t a particularly complex build, but it’s always great to see all the little steps that go into a project, leading up to the finished job. [SuperUnknown] said that wood would be a great material for this project, but he is opposed to the senseless killing of peaceful trees, so he built the base from 1/8″ plate steel. The glasses were plain shot glasses masked and etched to spell out DRINKO.

The most tedious part of a fabricating a game like this is cutting and installing the tines. [SuperUnknown] used old welding rods, cut with a slitting saw on his Bridgeport. The rods were TIG welded into the metal plate forming the back panel of the game.  To spice things up, [SuperUnknown] added an Arduino and some through hole WS2812 LEDs. While he didn’t have the flat surface mount WS2812’s on hand, that didn’t stop him. A quick trip through the bridgeport trimmed those frosted LED lenses down to size. The Arduino drives the LEDs through several patterns – much like the attract mode on a video game, or a Las Vegas sign. If you build your own DRINKO, we’d suggest adding some microswitches below each slot, so the drink to be consumed lights up.