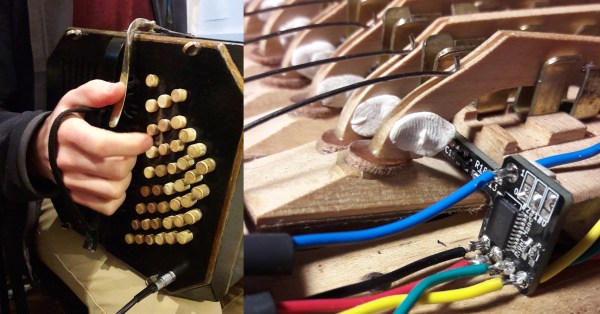 The bandoneon, known as the tango accordion, is quite a loud instrument to practice within the confines of an apartment, and could possibly lead to some neighborly disputes. [HLB] enjoyed playing his but wanted a way to turn down the volume a bit without, in consideration to his neighbors. Instead of building a whole soundproof room, he decided to throw Arduino’s and MIDI at the problem.

Bandoneons, like all accordions, are operated by pushing air from manually pumped bellows through a series of reeds, which are each opened and closed by a valve mechanism. [HLT] turned each valve lever into a simple on/off switch by attaching a magnet, with hall-effect sensors on long custom PCBs next to each row of valves. The hall effect sensors are connected to I2C I/O expander ICs which connect to an Arduino Nano, one for each side of the instrument, which sends out MIDI messages via serial. Everything is mounted inside what looks like quite an old instrument with Blu Tack to avoid having to make a lot of permanent modifications.

The bandoneon still functions normally with no permanent modifications, so to play with MIDI-only the bellow is simply not pumped. This means [HLB] can’t modulate the MIDI velocity (loudness) while playing, which he admits is a limitation but better than not playing at all. He does, however, note that he could add a pressure sensor inside the bellow if we wanted to add velocity to the midi output when neighbourliness isn’t a consideration. On the audio output side [HLB] built a small stand-alone synthesizer with an Odroid SBC running FluidSynth and a HiFi shield.