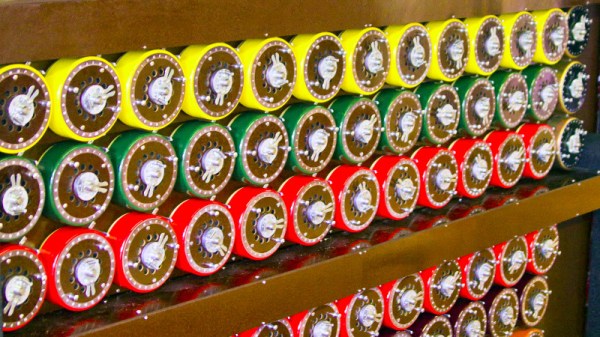 Fans of vintage codebreaking machinery might be interested to hear that the only working reconstruction of a Turing-Welchman Bombe is likely to soon be on the move. The electromechanical device, a replica of those used on the Second World War Enigma codes, is housed at Bletchley Park, the former codebreaking center established before the outbreak of war to house British and Polish codebreakers.

Bletchley Park itself is now a tourist attraction. The news is that a display reorganization has caused the Turing Welchman Bombe Rebuild Trust that owns the Bombe to approach the neighboring National Museum Of Computing with a view to housing it alongside their reconstruction of the Colossus electronic computer. The Colossus was famously used on the Lorenz cipher. This is an exciting development for the museum, but as an organization reliant on donations they face the task of finding the resources to create a new gallery for the arrival. To that end, they have launched a crowdfunding campaign with a target of £50000 ($69358.50), and they need your donations to it for the project to succeed. They have raised over £4500 in the few days it has already been open and there is most of a month still to go, so we hope they achieve their goal.

The Bletchley Park site is now surrounded by the post-war new town of Milton Keynes, and is easy enough to get to should you find yourself in the UK. We visited The National Museum Of Computing a couple of years ago and spent a very happy day touring its extensive and fascinating collection. If you want to read more about the Bombe you might like to read our review, and also our impression of Colossus.

As part of their campaign, the museum has produced a promotional video, which we have placed after the break.