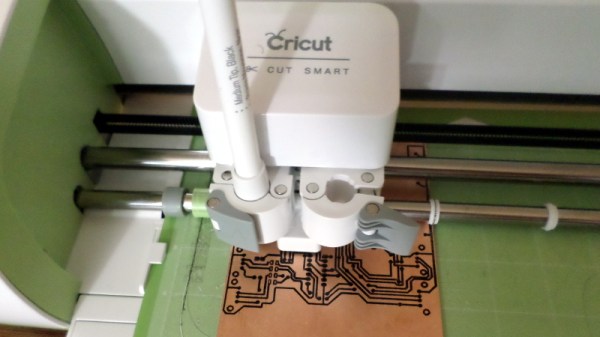 UPDATE: Hackaday was contacted by a PR company claiming to represent Cricut. They clarified that machines are not deactivated upon resale, but the new owner will need to set up their own online account.

UPDATE #2 (3/21/21): In the wake of this controversy, Cricut have announced that they will not move forward with the upload limit for customers who are not paying subscribers.

In our community we like to think of ourselves as pioneers in the field of domestic CNC machinery, with our cheap 3D printers. But there’s another set of people who were way ahead of us, and they’re a rather unexpected one, too. Crafters were using CNC cutting machines well before we were, and while some may deride them when used for sparkly greeting cards sold on Etsy, they can be an extremely useful tool for much more than that. Probably the best known brand of cutter comes from Cricut, and that company has dropped a bombshell in the form of an update to the web-based design software that leaves their now very annoyed users with a monthly upload limit of 20 new designs unless they sign up for a Cricut Access Plan that costs $9.99 on monthly payments. Worse still, a screenshot is circulating online purporting to be from a communication with a Cricut employee attempting to clarify  matters, in which it is suggested that machines sold as second-hand will be bricked by the company.

Also, soon we will be making changes that affect members who use the free Design Space app without a Cricut Access plan. Every calendar month, these members will be allowed to upload up to 20 personal images and/or patterns. Members with a paid Cricut Access plan will have unlimited uploads.

We’d like to think that given the reaction from their online community the subscription plan will backfire, but unlike the world of 3D printing their market is not necessarily an online-savvy one. A crafter who buys a Cricut from a bricks-and-mortar warehouse store and uses it with Cricut cartridges may not balk at being required to pay rent to use hardware that’s already paid for in the same way a member of our community with a 3D printer would. After all, Cricut have always tried to make their software a walled garden.

There are of course plenty of alternative CNC cutting machines (The favourite in ones that have made it here seems to be the Silhouette Cameo) that don’t come with this type of baggage, and the online Cricut community are busily raising their profile in the wake of this news. Probably because of their restricted functionality there have been very few hacks here using a Cricut machine, but all of this leaves us wondering whether the machines themselves could be exploited to take less restrictive firmware.