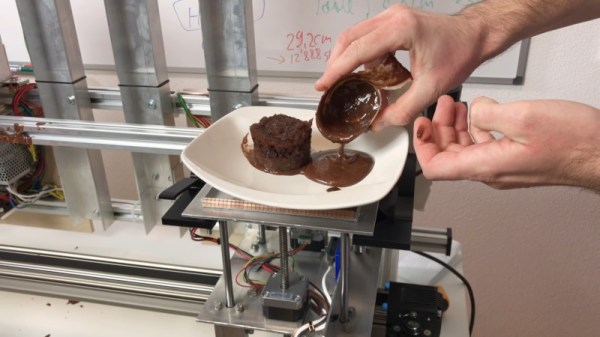 Baking cupcakes is a fun pastime, and one which we imagine many people took up in this year of quarantine and lockdown. However, anything a human can do, a machine can certainly make an attempt at, as [Skyentific] shows with this roboticized cupcake machine.

The build will be familiar to anyone who has worked with 3D printers or DIY CNC machines before. A series of stepper motors move a carriage carrying a regulation-sized patty pan. This is filled with dough from a tube, squirted out by a modified electric caulking gun. The carriage then transports it to a small microwave chamber of custom construction. After a minute or so of cooking, it’s then removed, and topping is applied from a further two caulking guns. An Arduino is in charge of the operation, running the show with some stepper drivers, limit switches, and a bank of relays.

The final product isn’t the prettiest cupcake we’ve ever seen, but it’s perfectly edible. We can imagine with some small modifications the device could probably cook batches of four at a time without too much trouble. We’ve seen other baking robots before, too. Video after the break.