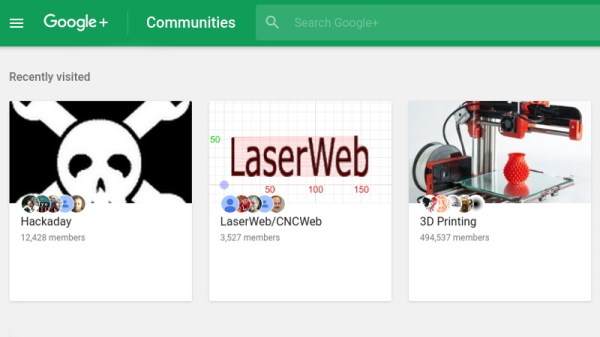 Google+ is dead. Granted people have been saying that much for years now, but this time it’s really true. As of April, Google’s social media experiment will officially go the way of Reader, Buzz, Wave, Notebook, and all the other products that the search giant decided they were no longer interested in maintaining. Unfortunately in the case of Google+, the shutdown means losing a lot of valuable content that was buried in the “Communities” section of the service. Or at least that’s what we all thought.

Thanks to the efforts of [Michael Johnson], many of those Google+ communities now have a second chance at life. After taking a deep dive into the data from his own personal Google+ account, he realized it should be possible to write some code that would allow pulling the content out of Google’s service and transplanting it into a Discourse instance. With some more work, he was even able to figure out how to preserve the ownership of the comments and posts. This is no simple web archive; you can actually log into Discourse with your Google account and have all of your old content attributed to you. END_OF_DOCUMENT_TOKEN_TO_BE_REPLACED