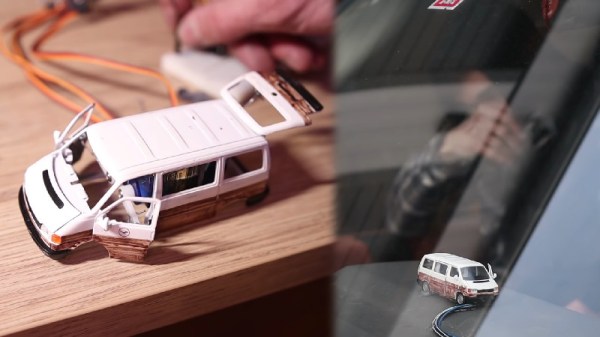 The amount of technology in modern cars is truly staggering. Heated seats, keyless entry, and arrays of helpful cameras are all becoming increasingly common in all but the cheapest of models. [mathisox] drives a slightly older Volkswagen van, which has been converted into a camper. Unfortunately, it lacks a proper door ajar display. Nevermind that, though – there’s a charming solution to this problem.

Rather than stick to the automotive standard of boring indicator lights and low-resolution LCD displays, [mathisox] took a more analogous approach. A small model car matching his van was sourced and quickly gutted for the project. It was then fitted with servos to open and close the doors and rear hatch. The servos are controlled by an Arduino Nano, which reads the door switches in the vehicle and actuates the appropriate parts on the model.

With the model car stuck prominently on the dashboard, it serves as a clear visual indicator of the current status of the vehicle’s doors. It’s far less intrusive than those old Chryslers which repeatedly insisted that a door is a jar.

[Thanks to Raffael for the tip!]