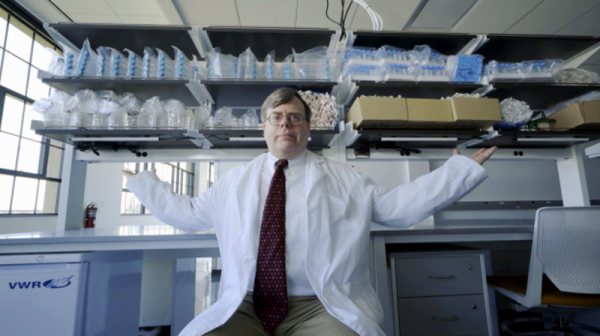 Since the rise of Kickstarter and Indiegogo, the world has been blessed with $100 resin-based 3D printers, Video game consoles built on Android, quadcopters that follow you around, and thousands of other projects that either haven’t lived up to expectations or simply disappeared into the ether. The idea of crowdfunding is a very powerful one: it’s the ability for thousands of people to chip in a few bucks for something they think is valuable. It’s a direct democracy for scientific funding. It’s the potential for people to pool their money, give it to someone capable, and create something really great. The reality of crowdfunding isn’t producing the best humanity has to offer. Right now, the top five crowdfunding campaigns ever are two video games, a beer cooler, a wristwatch with an e-ink screen, and something to do with Bitcoin. You will never go broke underestimating people.

[Dr. Todd Rider] wants to change this. He might have developed a way to cure nearly all viral diseases in humans, but he can’t find the funding for the research to back up his claims. He’s turned to IndieGoGo with an audacious plan: get normal people, and not NIH grants, to pay for the research.

The research [Dr. Rider] has developed is called the DRACO, the Double-stranded RNA Activated Caspase Oligomerizer. It works by relying on the singular difference between healthy cells and infected cells. Infected cells contain long chains viral double-stranded RNA. The DRACOs attach themselves to these long strands of RNA and cause those cells to commit suicide. The research behind the DRACO was published in 2011, and since then [Dr. Rider] has already received funding from more traditional sources, but right now the project is stuck in the ‘funding valley of death’. It’s easy to get funding for early research, but to get the millions of dollars for clinical trials it takes real results – showing efficacy, and proving to pharmaceutical companies or VCs that the drug will make money.

So far, results are promising, but far from the cure for HIV and the common cold the DRACO promises to be. [Dr. Rider] has performed a few tests on cell cultures and mice, and the DRACOs have been effective in combating everything from the common cold, to the flu to dengue hemorrhagic fever.

The IndieGoGo campaign is flexible funding, meaning all the money raised will go towards research even if the funding goal is not met. Right now, just over $50,000 has been raised of a $100,000 goal. That $100k goal is just the first step; [Dr. Rider] thinks he’ll need about $2 Million to test DRACOs against more viruses and hopefully show enough progress to get additional traditional funding. That $2 Million is a little less than what Solar Roadways raised, meaning no matter what [Dr. Rider] will make one important medical discovery: people are very, very, very dumb.