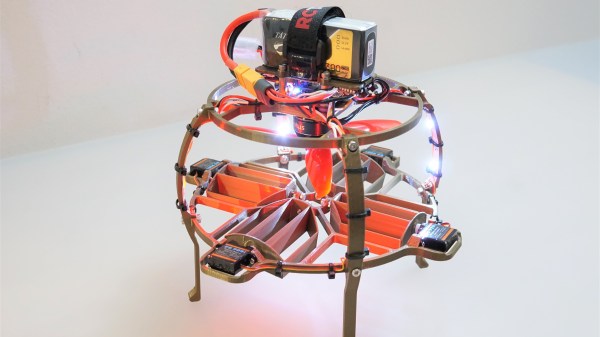 When mentioning drones, most people automatically think of fixed-wing designs like the military Reaper UAV or of small quadcopters. However, thanks in large part to modern electronics, motors, and open-source control systems, it is possible to build them in a variety of shapes and sizes. [Benjamin Prescher] is working on the second version of his single rotor Ball-Drone, which uses four servo-actuated fins for control.

The first version of the ball drone flew but was barely controllable and had a tendency to tip over. After a bit of research, he found that he had fallen victim to the drone pendulum fallacy by mounting the heavy components below the propeller and control fins. Initially, he also used conventional fin control that caused the servos to jitter due to high torque loading. By changing to grid fins, the actuation torque was reduced, eliminating the servo jitter.

Mk2 corrected the pendulum problem by moving most of the components to the top of the drone. The 3D printed frame (available on Thingiverse) was also dramatically changed and simplified to reduce weight. Although [Benjamin] designed a custom flight controller with custom control software, the latest parts list contains an off-the-shelf flight controller. He mentions that he had started working with Betaflight. The most complex part of a drone is not the mechanics or even the electronics, but the control software. Thanks to open source projects like Betaflight and Ardupilot, you don’t need to write control software from scratch to get something in the air.

The ball drone seems well suited to an indoor environment, but we’re not sure if it has any real advantages over a quadcopter with ducted propellers. Servos are cheaper than motors and ESCs, so there might be a small cost saving. Drop your thoughts on the advantages/disadvantages in the comments below. END_OF_DOCUMENT_TOKEN_TO_BE_REPLACED