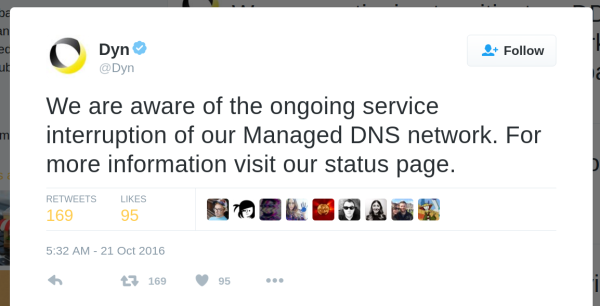 Early today, some party unleashed a massive DDoS attack against Dyn, a major DNS host. This led to a number of websites being completely inaccessible. DNS is the backbone of the Internet. It is the phone book that turns URLs into IP addresses. Without it, the Internet still works, but you won’t be able to find anything.

Over the past few months, security professionals have suggested — in as responsible terms as possible — that something big could happen. In early September [Bruce Schneier] wrote, Someone Is Learning How To Take Down The Internet. The implication of this very general warning is that someone — possibly a state actor, but don’t be too sure about that — was figuring out how to attack one of the core services of the web. The easiest way to effectively ‘turn off the Internet’ for everyone is a Distributed Denial of Service attack against root servers, DNS servers, or some other service that plays a key role in the web.

Dyn is responding well to the attack this morning, and the Internet is safe from attack for the time being. As for who is responsible for the attack, what the goal is, and if this will happen again, no one knows. An attack on this scale is most certainly someone with a very large pocketbook or a state actor (Russia, China, the US, UK, Germany, Israel, or the like) but that’s not a given. It’s also not given the DDoS attacks have stopped. You might not be able to read this, but if you can, it might be a good idea to find a shortwave radio.