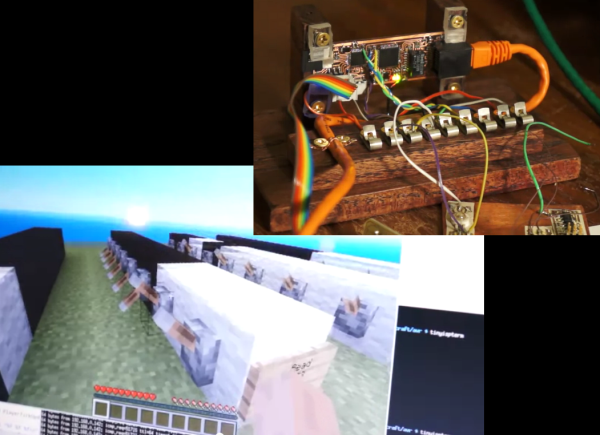 Wanting to test his skills by building a webserver [Cnlohr] decided to also code a Minecraft server which allows him to toggle pins from inside the game. The rows of switches seen above give him direct access to the direction register and I/O pins of one port of the ATmega328.

The server hardware is shown in the image above. It’s hard to tell just from that image, but it’s actually a glass substrate which is [Cnlohr’s] specialty. He uses an ENC424J600 to handle the networking side of things. This chip costs almost twice as much as the microcontroller next to it. But even in single quantities the BOM came in at under $20 for the entire build.

In the video after the break [Cnlohr] and a friend demonstrate the ability for multiple users to log into the Minecraft world. The simulation is fairly bare-bones, but the ability to affect hardware from the game world is more exciting than just pushing 1s and 0s through some twisted pairs.