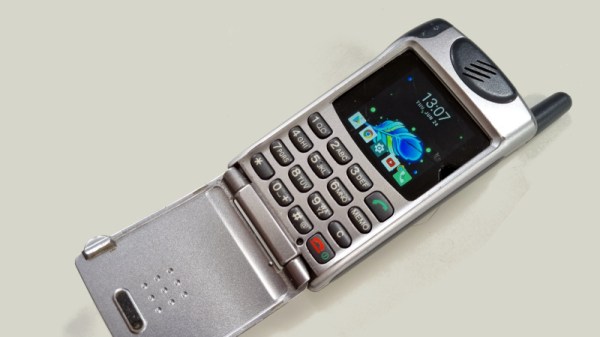 Cars and smartphones have something curious in common, just as most everyday saloon cars from different manufacturers have tended towards similarity, so have smartphones. Whether your smartphone the latest and greatest or only cost you $50 from a supermarket, it matters little to look at because both phones will be superficially near-identical black slabs.

It wasn’t always this way though, in decades past phones from different manufacturers each had their own flavours, and there was a variety in form factors to suit all tastes. There’s a ray of hope for fans of those days though, in the form of [befinitiv]’s 2000-era Sony flip phone. It runs Android. Yes, you read that right, there on the tiny screen is Android 9.

Of course whatever processor and electronics the phone came with are long gone, and instead the phone sports the internals of a modern Chinese watch-smartphone grafted in in place of the original. The whole electronics package fits in the screen opening, and though it required some wiring for the USB-C socket and a few other parts it looks for all the world from the outside as though it was meant to run Android. You can take a look in the video below the break.

He cheerfully admits that there’s still a way to go for example in getting the original keyboard working, but even with a tiny touchscreen it’s good enough to be a daily driver. It may be a little on the small side, but for those of us who miss our old phones maybe there’s hope in it for something new.

Meanwhile this isn’t the first re-use of an old phone we’ve seen recently.

END_OF_DOCUMENT_TOKEN_TO_BE_REPLACED 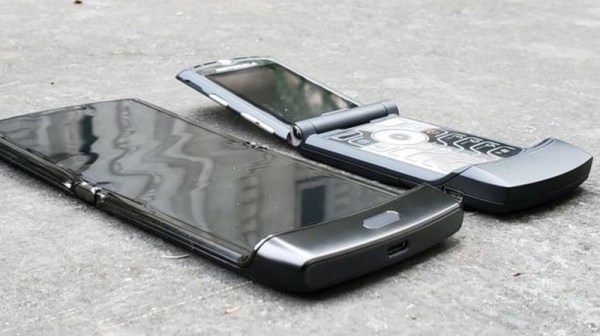 If you’re the kind of person who hates this new generation of smartphone users and longs for a nostalgic past, you’re not far from the new target demographic for many commercial phone manufacturers. Major phone companies like Motorola and Huawei have been developing foldable versions of conventional smartphone designs, intended to be more versatile while maintaining the same functionality as their less flexible counterparts.

It’s certainly gimmicky, but phones like the Samsung Galaxy Fold, the Motorola Razr, and the Huawei MateX are elegant from an engineering perspective. Developing a seamless interface experience, maximizing surface area for functionality, and maintaining the same nostalgic flip phone aesthetic while making use of familiar smartphone features isn’t an easy design process.

For the Razr, a hinge system that takes up about a third of the phone’s internal space allows the OLED display to have no noticeable binder line. Rather than curving like a piece of paper, it forms a teardrop shape that prevents the screen from creasing and being damaged. Springs and pistons below the surface move small places underneath where the user will be tapping – folded in, the plates slide away. It’s an interesting effect, although as you can see in the banner image, it doesn’t quite achieve optically flat perfection.

In order to ensure that the screen doesn’t overheat as it bends, it is made up of microlayers sandwiched together. To balance weight, the circuits and battery is split into two, operating on each half of the device, an unusual design choice for smartphones. Placement of the array of radios and antennas is also a challenge since they can’t be too close to each other or the processor, which can interfere with signal transmission.

Other devices like the Royale Flexpai are more so proof-of-concepts making use of flexible screens and batteries, rather than capturing the aesthetics of a flip phone generation — but who doesn’t want their smartphone to unfold into a tablet when needed? The future of smartphone technology is looking interesting, and we’ll be sure to see even more iterations of flexible displays in the near future.