Lasers kill cameras. Someone at CES visited the AEye booth, snapped a picture of an autonomous car at AEye’s booth, and the LIDAR killed the sensor. Every subsequent picture had a purple spot in the same place. While we know lasers can kill camera sensors, and this is a great example of that, this does open the door to a few questions: if autonomous cars have LIDAR and are covered in cameras, what’s going to happen to the cameras in an autonomous car driving beside another autonomous car? Has anyone ever seen more than one Cruise or Waymo car in the same place at the same time? As an aside, AEye’s company website’s URL is aeye.ai, nearly beating penisland.net (they sell pens on Pen Island) as the worst company URL ever.

This is something I’ve been saying for years, but now there’s finally a study backing me up. Lego is a viable investment strategy. An economist at Russia’s Higher School of Economics published a study, collecting the initial sale price of Lego sets from 1987 to 2015. These were then compared to sales of full sets on the secondary market. Returns were anywhere between 10 and 20% per year, which is crazy. Smaller sets (up to about 100 pieces) had higher returns than larger sets. This goes against my previous belief that a Hogwarts Castle, Saturn V, and UCS Falcon-heavy portfolio would outperform a portfolio made of cheap Lego sets. However, this observation could be tied to the fact that smaller sets included minifig-only packaging, and we all know the Lego minifig market is a completely different ball of wax. The Darth Revan minifig, sold as an exclusive for $3.99 just a few years ago, now fetches $35 on Bricklink. Further study is needed, specifically to separate the minifig market from the complete set market, but the evidence is coming in: Lego is a viable investment strategy, even when you include the 1-2% yearly cost of storing the sets.

Relativity Space got a launchpad. Relativity Space is an aerospace startup that’s building a rocket capable of lobbing my car into Low Earth Orbit with a methalox engine. They’re doing it with 3D printing. [Bryce Salmi], one of the hardware engineers at Relativity Space, recently gave a talk at the Hackaday Superconference about printing an entire rocket. The design is ambitious, but if there’s one device that’s perfectly suited for 3D printing, it’s a rocket engine. There are a lot of nonmachinable tubes going everywhere in those things. 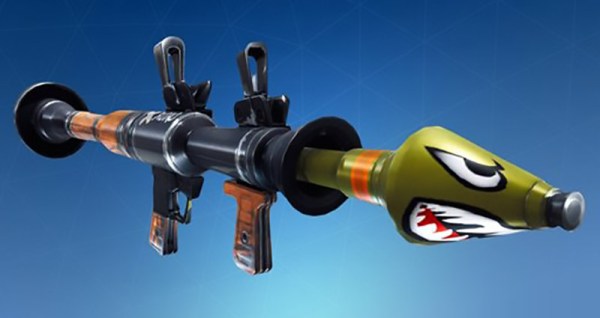 Minecraft is over and Red Dead Redemption II has barely even started yet. The biggest thing on the planet right now is Fortnite, and oh man, is it awesome. It’s the best game ever, and we wish every day was a Battle Royale. But what if Fortnite was real life? That’s exactly what [Giaco] and [David] did when they made an RC Fortnite Foam Rocket. It’s Fortnite, in the real world! If you don’t mind, we’re going to go T-pose in the corner.

The core of this build was done with the Maker Knife, first introduced as a Kickstarter by [Giaco] as an everyday carry utility knife that features ceramic blades. It’s impressive for a box cutter, but what’s even more impressive is that this fantastic tool can be used to make a real-life Fortnite rocket.

This rocket, like so many other RC planes we see these days, was constructed out of foam board, a technique that was popularized by the folks at Flite Test, and uses all the construction techniques you would usually see in a foam board model airplane. The hinges for the control surfaces are chamfered and reinforced with packing tape, servos are just hot glued to the body, and the control horns are just bits of cardboard.

What makes this really impressive is that this Fortnite rocket actually flies. [Giaco] took this plane out with [David] of rcexplorer fame, and even though this ‘plane’ didn’t really have any lifting surfaces, despite indiscernible center of gravity, and the fact that the paint weighed more than the plane itself, this thing can fly. Fairly well, too, until it gets stuck in a tree. There are prices to pay for producing content that’s this attractive to 12-year-olds, I guess.