If you’re ever flying into LAX and have the left side window seat, just a few minutes before landing, look out the window. You’ll see a small airport just below you and what appears at first glance to be a smokestack. That’s not a smokestack, though: that’s a rocket, and that’s where SpaceX is building all their rockets. Already SpaceX has revolutionized the aerospace industry, but just down the street there’s another company that’s pushing the manufacturing of rocket engines a bit further. Relativity Space is building rockets. They’re 3D printing rocket engines, and they’re designing what could be the first rocket engine made on Mars.

Bryce Salmi is an avionics hardware engineer at Relatively Space, and he made it out to the 2018 Hackaday Superconference to tell us all about manufacturing rockets. It’s an entirely new approach to manufacturing rockets and rocket engines with a clean-slate design that could eventually be manufactured on Mars. 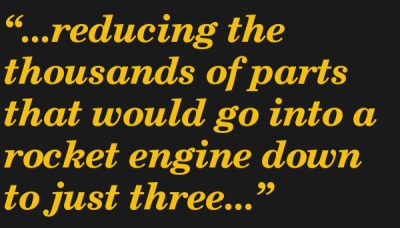 There is a lot of work that goes into manufacturing a rocket. There are jigs that could cost millions of dollars, there are tanks that have to be pressure tested, and there is a vast amount of labor involved for what is essentially a very carefully controlled explosion. This is changing with Relativity Space’s first rocket, the Terran 1. This is a 100-foot-tall, 7-foot diameter rocket that will launch 1250 kg to Low Earth Orbit. It uses Oxygen and Methane — the same fuel that SpaceX plans to use to return from the surface of Mars — and is almost entirely 3D printed. In fact, Relativity aims to build a rocket from raw materials and have it fly in two months.

If you’re printing a rocket engine, you need a 3D printer, and for this Relativity is using Direct Metal Laser Sintering, where metal powder is spread across a bed, a laser melts the powder into a pattern, and another layer of powder is deposited. While this sounds futuristic, it’s becoming a fairly standard industrial process, with Boeing and Airbus either looking into DMLS for manufacturing parts or using it in planes already. Relativity has designed their AEON 1 engine to be entirely 3D printed, reducing the thousands of parts that would go into a rocket engine down to just three. The entire engine is designed to be 3D printed, and there really is no other way to make this engine. 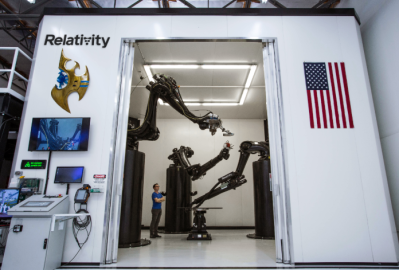 But Relativity is talking about 3D printing an entire rocket, not just an engine. You can’t buy a machine that will print something 100 feet long and seven feet in diameter; you’ve got to build one. That’s what Relativity Space did with the creation of the Stargate. The Stargate (named after StarCraft, by the way), is a wire deposition 3D printer designed to print tanks and structural bodies for the Terran 1 rocket.

Inside the Stargate, there are several robotic arms, each equipped with a wire deposition head. These arms can be used together where one arm can print, another arm machines away the excess, and another inspects the work, all at the same time.

What Relativity Space is doing is special. Making rockets is expensive, because no company will ever make very many — a low volume — and the labor that goes into these rockets is very high. By reducing the part count of the engine, manufacturing tanks and structures with 3D printing, and reducing the tooling cost, Relativity space is building rockets that are cheaper and possibly lighter than anything else out there. Since these rockets can be manufactured with robots, this might just be the rocket we launch from Mars.