Would you believe a pendulum clock that can keep time accurately to within one second per year? If you answered “yes”, you’ve either never tried to regulate a pendulum clock yourself, or you already know about the Shortt Clock. Getting an electromechanical device to behave so well, ticking accurately to within 0.03 parts per million, is no mean feat, and the Shortt clock was the first timekeeping device that actually behaves more regularly than the Earth itself. 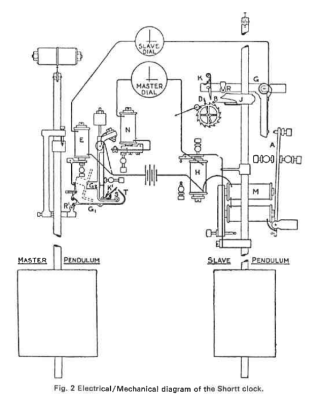 [Matt Little] passed us this link to an interesting technical writeup (PDF) of the clock. The trick behind the most accurate pendulum clock is that it actually has two pendulums (pendula?). One, enclosed in a metal cylinder held at a decent vacuum, keeps time but doesn’t do any mechanical work at all. Instead, through a series of mechanisms that are designed to alter the pendulum’s swing as little as possible, it sends an electrical signal every 30 seconds and kicks the slave clock which is purposely designed to run a little bit slowly. The slave clock is then free to do heavy lifting like move clock hands.

The cool part of the article comes when the author gets to shine a light on a mirror on the master pendulum, and compare its behavior to modern ultra-high precision clock sources. There’s a lot of what looks to be random noise in the clock’s periodicity, but the biggest contributors turn out to have physical origins: the tidal pull of the moon (obvious) and the sun (what?) change the local gravity enough to leave their mark.

If you can’t get enough Shortt clocks, look at the Wikipedia entry on the device, or check out this private collector’s website for pretty pictures, including the one used in the banner image. Or if your tastes run more toward the modern cyberpunk atomic clock, we’ll just leave this link here.