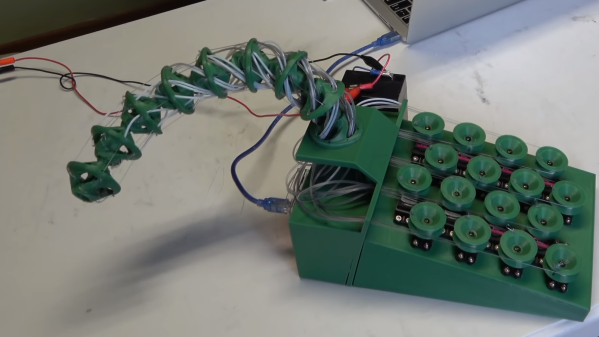 We’ve written about a lot of DIY robotic arms. Some of them are high-performance, some are inexpensive, and some are just uniquely fun. This one certainly falls into the last category; whilst watching an episode of Black Mirror, [Gear Down For What] was struck by inspiration for a thin robotic limb. After some iterations he has a final prototype, and it’s quite something to see in action.

To make a robotic arm as slender as possible, the actuators can’t be mounted on the arm itself but must instead drive the arm remotely. There are a number of ways of doing this, and though [Gear Down For What] considered using pneumatics or hydraulics, he opted to keep it simple with RC servos which produced a nifty solution that we really like.

The arm is made out of a series of 3D printed ball joints, allowing rotation in any direction. The tricky bit is transferring the force from the servos to each joint. Initially bare fishing line was considered, but this made the remote joints difficult to control when lower joints were moving. The solution was to use the fishing line inside of tubing, similar to the way that bike brakes operate. This allows the force to be carried to the appropriate joint regardless of lower movement. Each joint needs an x and y tension to allow it to rotate in any direction, which means an army of sixteen servos is needed to operate the eight segment arm.

Robotic arms are always fun to build and we’ve seen some pretty neat uses for them, such as mapping magnetic fields in 3D, or teaching sign language.