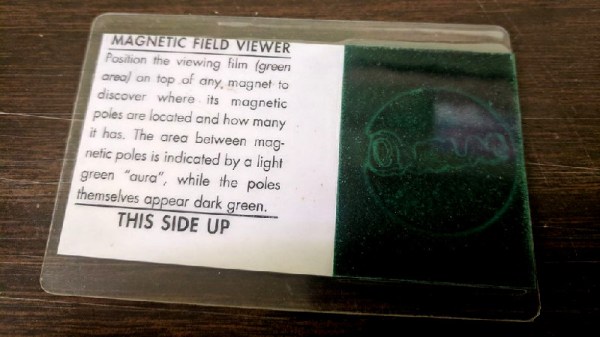 Magnets have always been fun, particularly since the super-powerful neodymium type became readily available. You can stack them up, pull them apart, or, if you really want, use them for something practical. Now [Adric] has shown us a new use for them entirely – by writing hidden messages on them.

It’s a remarkably simple hack, but ingenious all the same. [Adric] was pretty sure that the Quelab hackerspace laser wasn’t powerful enough to cut or etch a nickel-plated neodymium magnet. However, they suspected it would have just enough power to heat localised parts of the magnet above the Curie temperature, where the magnetic properties of the material break down.

Thus, the laser cutter was set up to run a few passes over some neodymium magnets. By placing a magnetic viewing film over the magnet, it’s possible to make the etched pattern visible. There was also some incidental visible marking of the magnet surface, which [Adric] thinks is due to the tape applied to the magnet before the laser processing.

For those of you operating spy rings in deep cover, you’ve now got a new way to send them secret messages. Just be sure to check in with the local postal service as to their policies regarding giant magnets in the post. Then you can contemplate whether you have the ability to sense magnetic fields. [Alex] tiped us off about the evil sounding noises coming from http://www.thedarkknightrises.com/. when you go there your pretty much greeted with a wav file and if you have a quick eye on the status bar its pretty easy to get the direct link to the file and download it. Thats all great, but why would you want to?

Well if you play back the file in a program that supports spectrograms (like audacity) you will find that there is a twitter hash hidden within the audio spectrum, that presents itself as plain text in a pretty well rendered font. Of course this leads you to another part of the site where yet another puzzle awaits you.

While this is all an interesting way to stir up buzz about the upcoming (Batman) movie, we found hiding plain text in an audio file pretty wild, though its been done before or better such as the post we had not too long ago about Ham’s packing QR codes in a similar way.