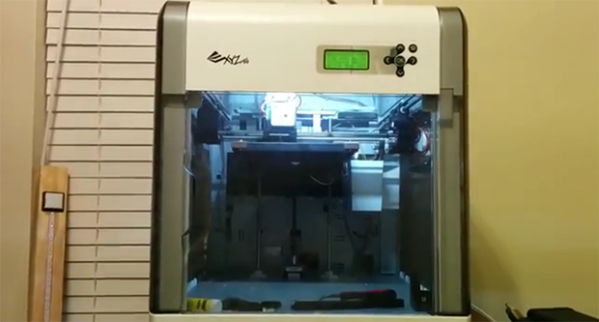 The Da Vinci printer from XYZprinting is turning out to be one of the best buys in the world of cheap, consumer printers. Sure, it uses chipped filament, but that’s an easy fix for anyone who knows what a .hex file is. And yes, the Da Vinci host software is a mess of proprietary garbage with limited functionality, but [Mark] has figured out a way around that.

When [Mark] received his Da Vinci, he immediately started snooping around inside the printer’s guts, like any good tinkerer should. He found an SD card holding all the sample prints that ship with the printer, all in a convenient Gcode format. Inside these sample .STL files were all the calls you would expect – setting the temperature, changing the layer height, and all the other good stuff you’d find in any other RepRap.

With a little bit of modification to .STL files generated by any slicing program, [Mark] isn’t limited any more by the terrible host software that ships with the Da Vinci. Combine this with the ability to reset the chip inside the filament cartridge, and [Mark] has a printer at least as functional as any open hardware model.

END_OF_DOCUMENT_TOKEN_TO_BE_REPLACED

After interviewing the creator of Slic3r and the folks at Shapeways, [Andrew] is back again with his adventures in 3D printer videography and an interview with [David Braam] of Ultimaker

About a year ago, [David] looked at the state of the art in 3D printer control and Replicator G. While Replicator G, along with Pronterface and Repetier-Host both convert 3D models into G-code files as well as control the printer while its squeezing plastic out onto a bed. [David] thought the current state of these RepRap host programs were janky at best, and certainly not the best user experience for any home fabricator. This lead him to create Cura, a very slick and vastly improved piece of host software for the Ultimaker.

Cura isn’t just a fancy front end on an already existing slicer engine; [David] created his own slicing algorithm to turn .STL files into G-code that’s immensely faster than skeinforge. Where skeinforge could take an hour to slice a complex model, Cura does the same job in minutes.

There are also a bunch of cool features available in Cura: you can rotate any part before sending it to the printer, as well as pulling voxels directly from your Minecraft world and sending them to your printer. Very, very cool stuff, and if you’re running a Ultimaker or any other RepRap, you might want to check it out.