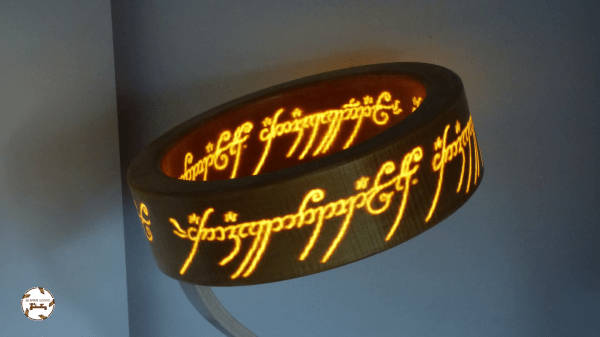 [Olivier Gomis] did not have access to the fires of Mount Doom to forge a large replica of the One Ring, so he had to settle for patience, maple, and a wood lathe. It does have the added convenience of not needing to fire to expose its true nature, just angry pixies from a wall socket.

[Olivier] made the ring in separate inner and outer sections from 72 blocks of maple. The blocks were glued together in 12-sided rings, and stacked in layers to achieve the desired width. The surfaces were cut smooth and thinned out on a wood lathe, and an internal channel was created for LED strips. The Black Speech was cut through the walls of both the inner and outer surfaces using a manual router. Using the ring itself as a former, he made a wooden base for the router to allow it to slide across the surface without wobbling.

The inside wall was cut into sections and glued into a recess in the external portion. The inscriptions were covered with a maple veneer, which still allows it to be visible when the internal LEDs are switched on. The wiring runs from the base of the stand through an S-shaped stem that was made from layers of veneer clamped in a former. A total of 53 hours of painstaking effort went into this work of art, but the end product would make any hardcore Lord of the Rings fan envious.

For more LOTR-themed hacks, check out the secret door to the Mines of Moria secret door, and a sword that glow blue in the presence of unsecured WiFi.

END_OF_DOCUMENT_TOKEN_TO_BE_REPLACED

For a few years now, [Jomegat] has been thinking about Sting, the sword wielded by [Bilbo Baggins] and later [Frodo] in The Hobbit and The Lord of the Rings. Sting glows blue whenever an orc is near. Assuming the Elvish magic created by Tolkien is in reality highly advanced Elvish technology, [Jomegat] figured out a way to make his plastic Sting detect WiFi-enabled orcs.

Since The Hobbit was released, toy stores have been flooded with related merchandise that included a wonderful toy version of everyone’s favorite orc killing weapon. The only problem was how to add orc sensors to this plastic Sting. [Jomegat] assumed all orcs carry a cell phone, and being the low creatures they are, would always have their WiFi turned on. [Jomegat] found a very inexpensive WiFi detector key chain that would sense these phone-carrying orcs and light up to alert our warrior to imminent danger.

After acquiring the materials crafted from Elvish technology, [Jomegat] opened up the plastic hilt of Sting and installed the WiFi detector. Now, whenever Sting senses the preferred wireless connection of the orc, the blade glows a bright blue.

[Jomegat] was eaten by a grue shortly after completing this project.