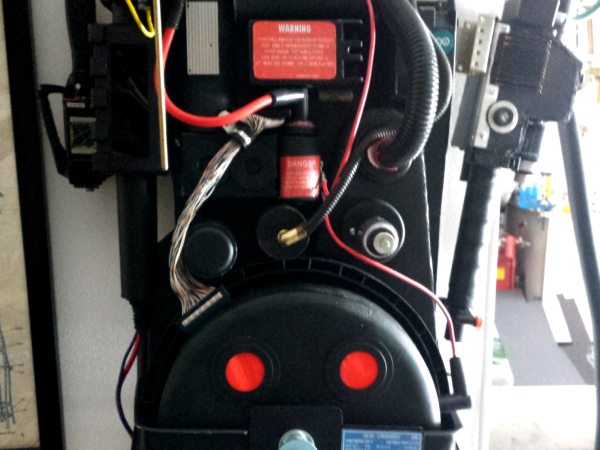 [John Fin] put a lot of work into his Ghostbuster’s proton pack prop with full-featured user control and effects. What appealed to us well beyond the exquisite build is the extra effort taken to write down the whole process in a PDF for anyone wishing to imitate him.

We all know that a lot of famous props are creatively rearranged household items. The famous Mr. Fusion from Back to The Future is actually a Krups coffee grinder with some logos adhered.

[John]’s prop is no different. The cyclotron is a five gallon bucket. A garlic powder container fills another function. As you look at it more and more items can be picked out. Is that a spark plug wire? The handles on that are suspiciously similar to a power tool case’s. It all comes together, and while it’s not screen accurate you’d have to be an extreme prop fanatic to tell.

Naturally, the core of [John]’s prop is an Arduino. It stores the sound files on a SD Card shield. It controls all the lights sounds and motors on the prop. This isn’t quite a point and shoot. You must toggle on the power, generator, and arming mechanisms before actually firing. If you do it out of order, the electronics will issue an alarm as warning, and each step in the process has its own unique audio and animated lighting.

Since the Proton Pack went so well, he also built a PKE meter and Ghost Trap to go along with his backpack. He’s ready to take on Vigo at anytime. You can see a video of his prop in action after the break.